Here are five low-key, not so tourist-y places we loved in Okinawa — places I wouldn’t hesitate to revisit on future trips. No crazy lines, no crazy prices. Just easy and comfortable for us tourist dummies.

The only issue with Okinawa is you definitely need a car to get around. But if you have a Taiwan driver’s license, just get a Japanese translation at the Taipei City Motor Vehicles Office and you’re good to go. 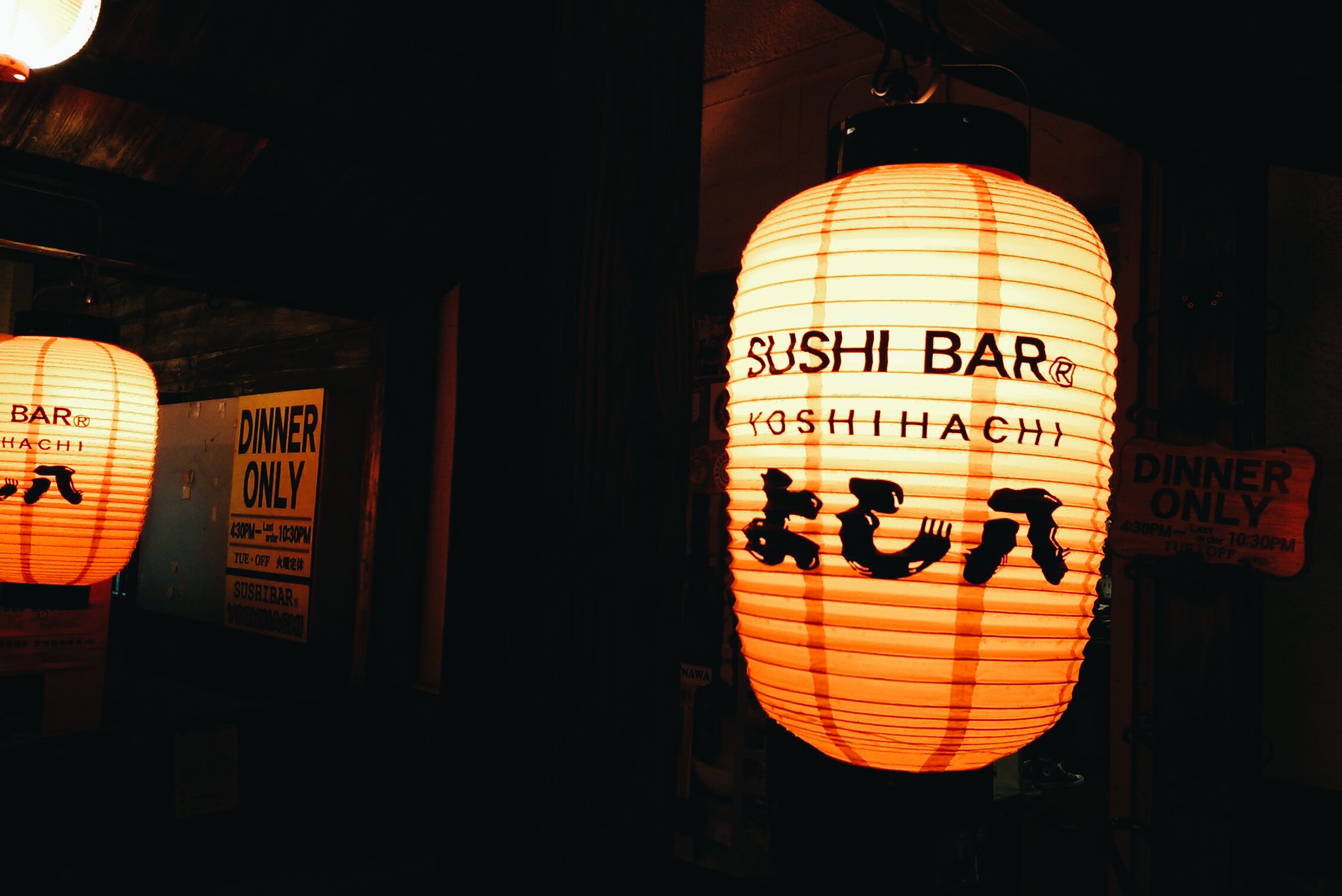 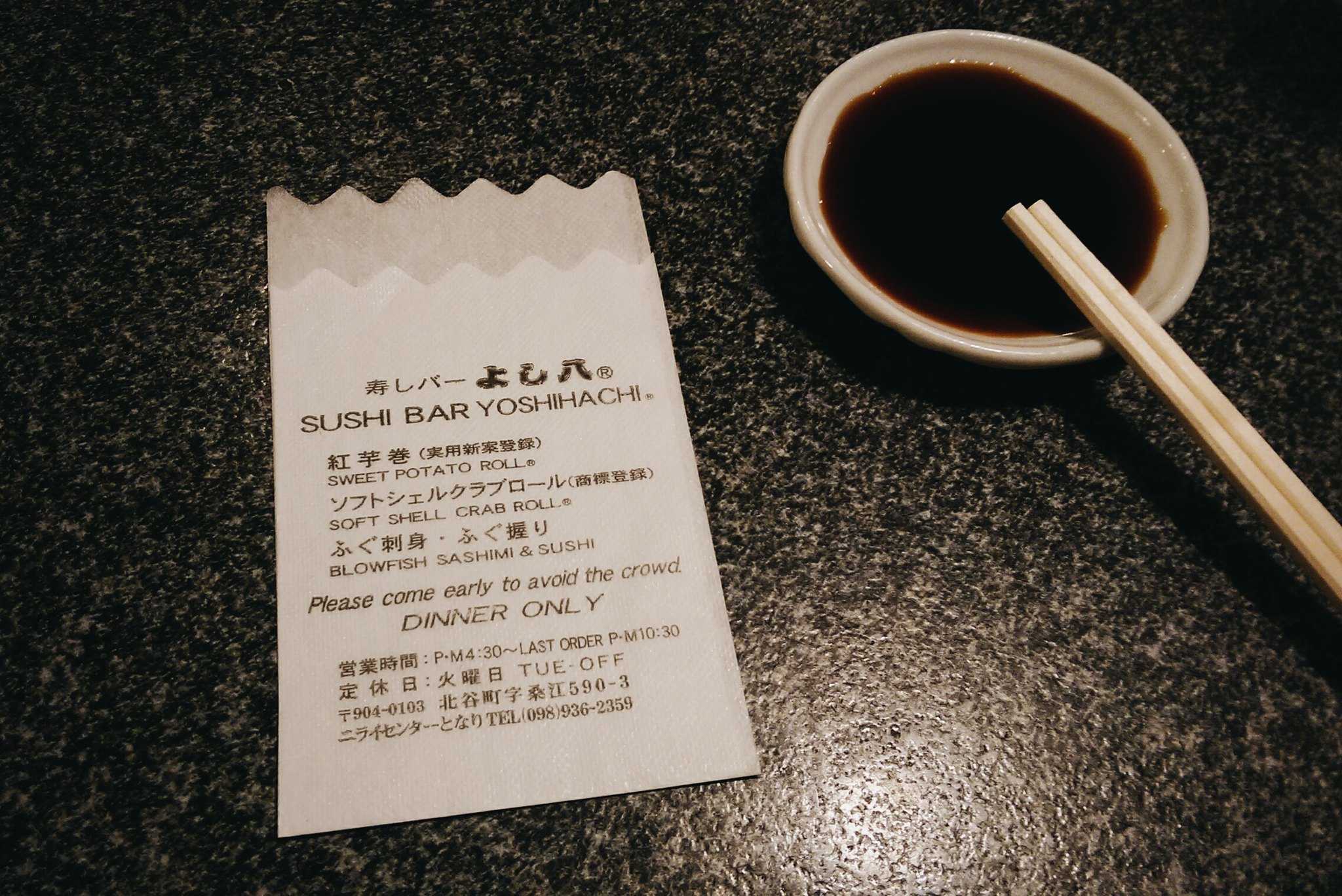 Yoshihachi is where we had a casual sushi dinner the first night of our trip. The crowd is a balanced mix of Americans who live and work in Okinawa, and also groups of local Japanese looking for a good meal.

It’s got the kind of grunge-y, chug-your-beer vibe you either love or you hate. We love, obviously. And you probably won’t run into any fellow Taiwanese. 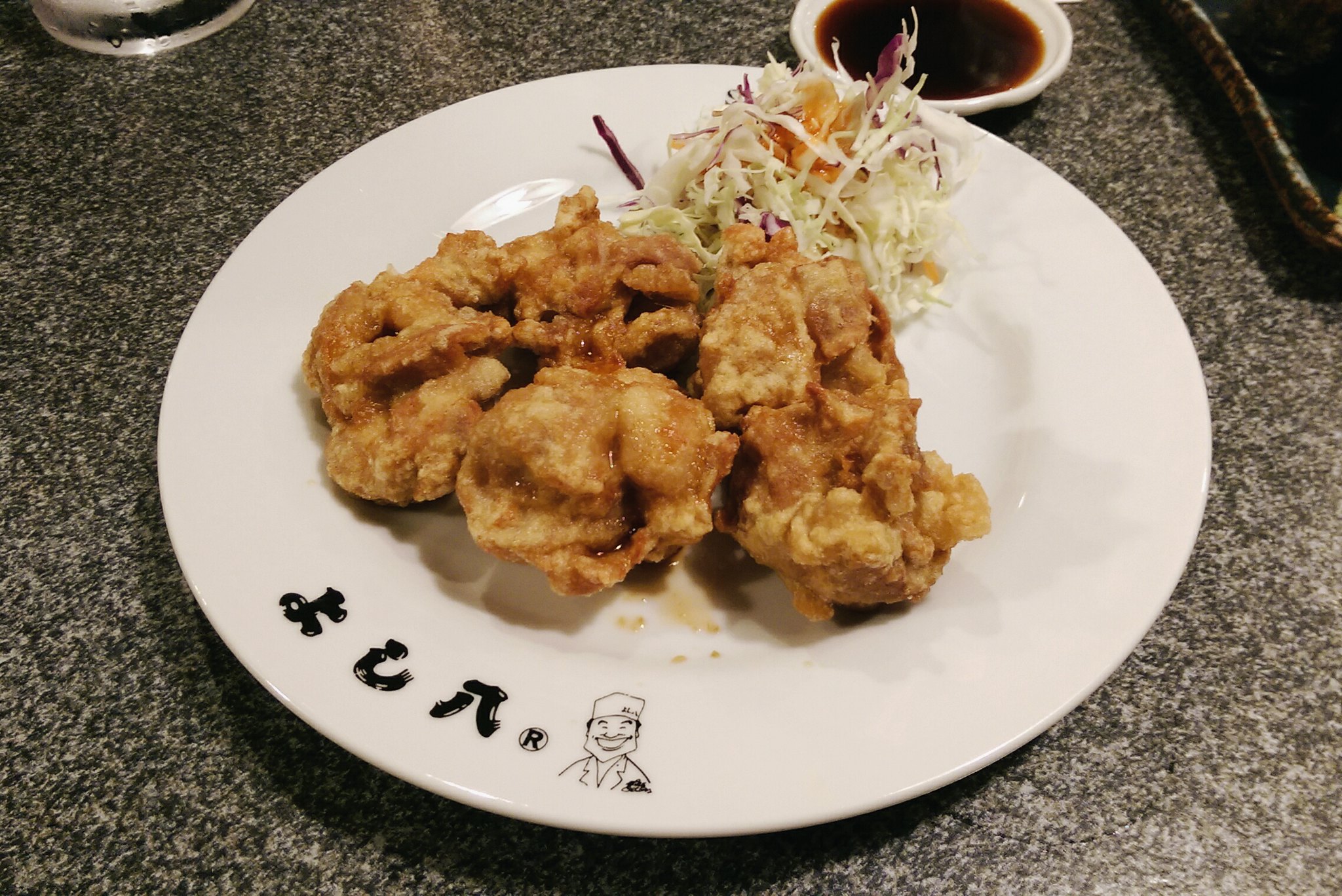 The sushi chef, Yoshi, is apparently a local legend. Everyone from Tom Arnold to Prime Minister Shinzo Abe has had a beer at Yoshihachi. The icing on the cake is the menu cover shows a blurry photo of Yoshi with a 16-year-old Tiger Woods.

Above is the fried chicken. The chicken they use is dark meat, so it’s really juicy. Goes nicely with an ice cold Orion draft. 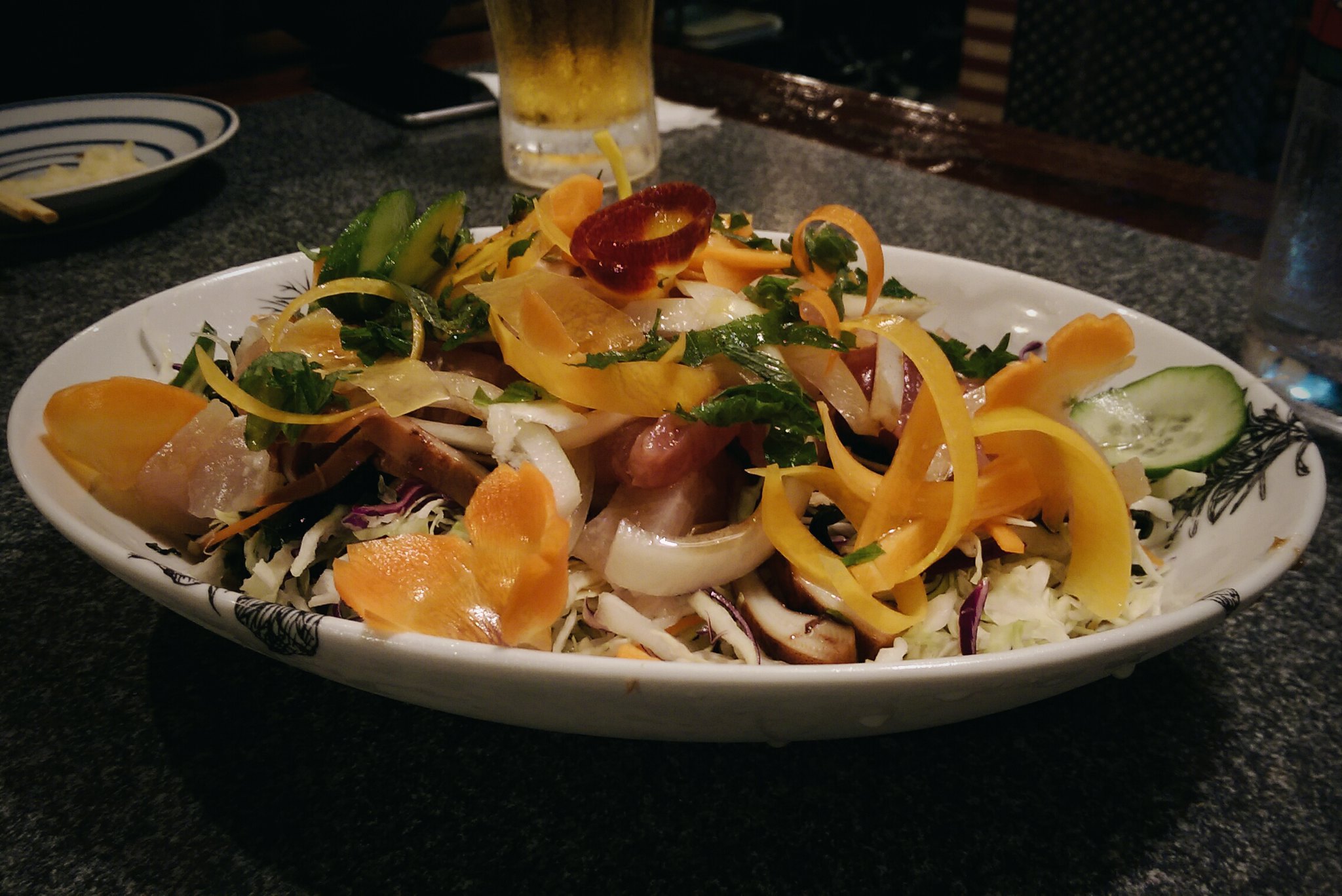 We ordered some American-style sushi rolls, nigiri, vegetable tempura, as well as this was the seafood salad. It’s hard to find American-style rolls in Taipei (I only know of one place, but haven’t gone to try) so if that’s what you’re into, Yoshihachi is the place to go nuts.

Out of everything we ordered, the uni nigiri was the only big disappointment. The nori wrapper was already wilted by the time it reached the table which pretty much sucked. 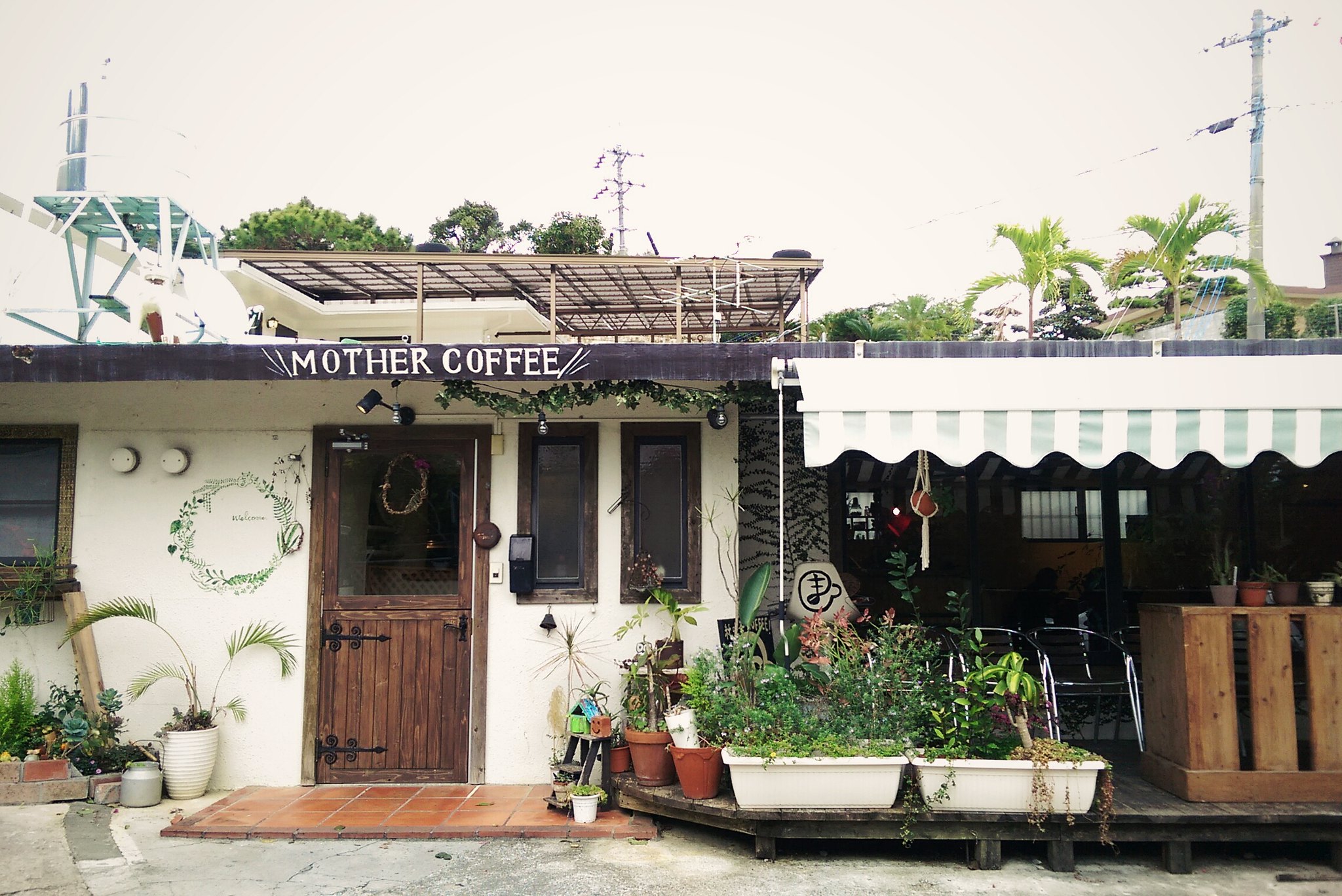 Out of all the cute and quirky cafes in Okinawa, I made a point to visit Mother Coffee for their famously photogenic “dutch babies”. The location is a little hidden, but it happened to be a 3-minute drive from where we were staying. 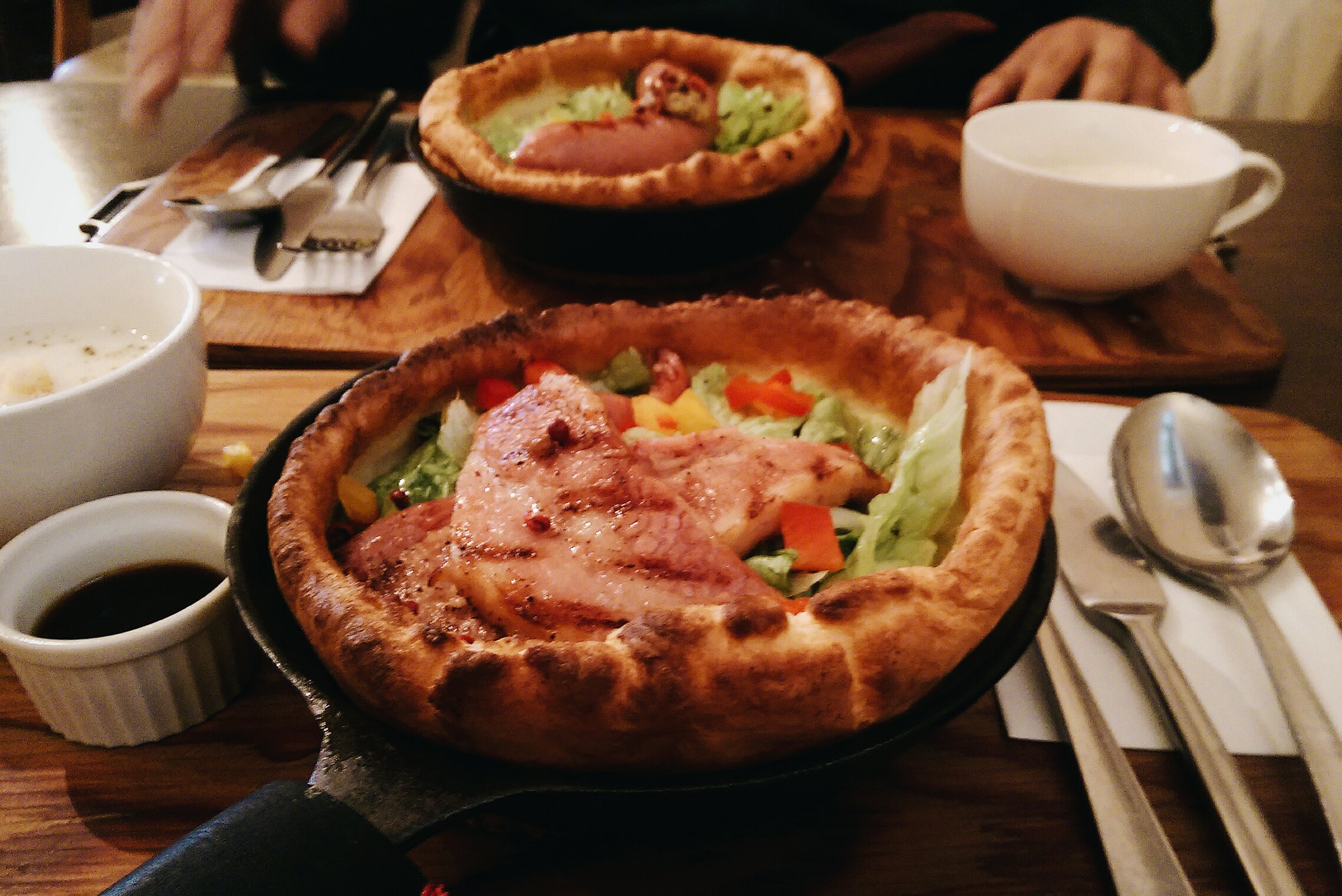 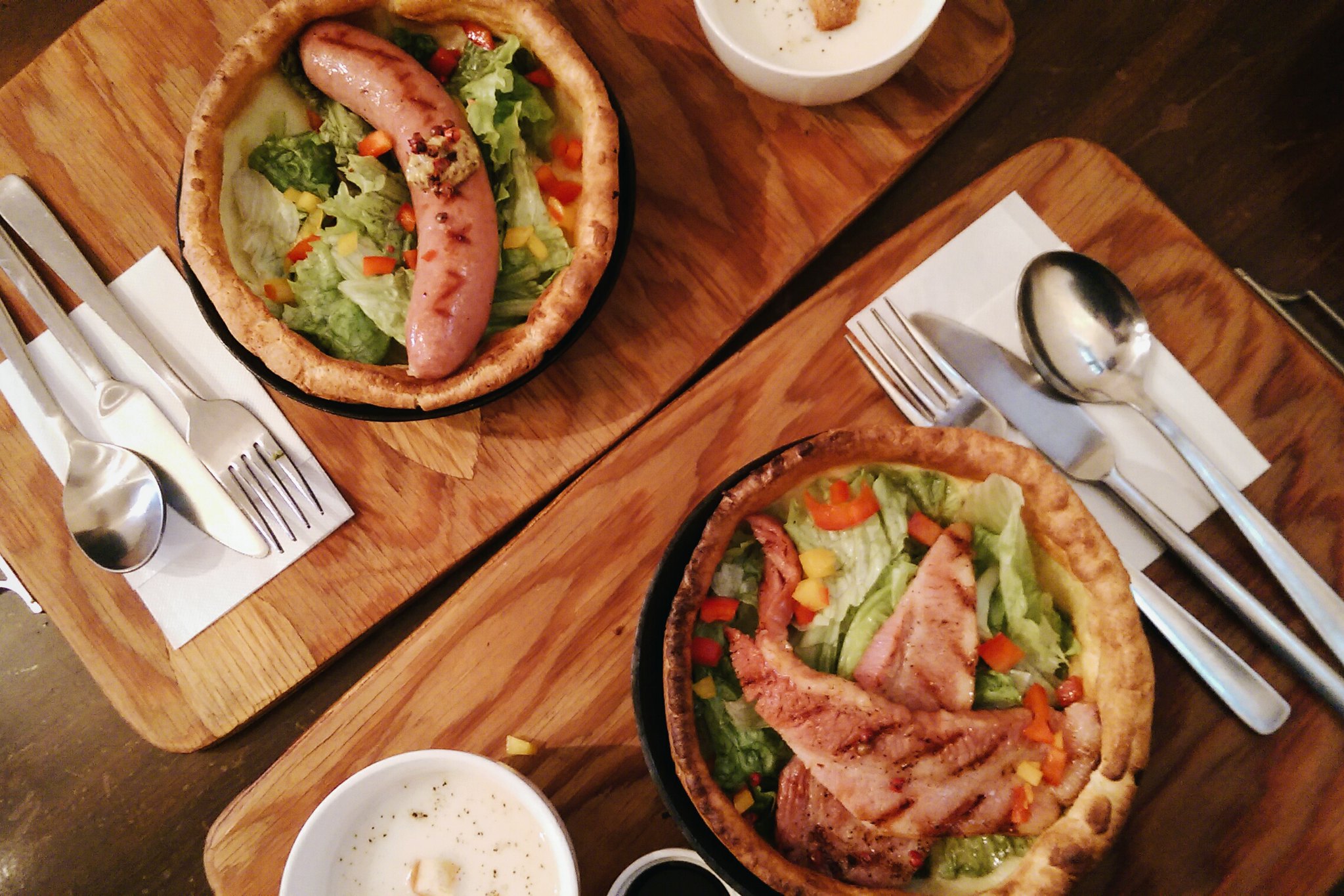 Since we arrived for brunch, we ordered the savory sausage and bacon versions. Both were so good. I’ll definitely be going back to Mother Coffee for the apple and caramel version next time. 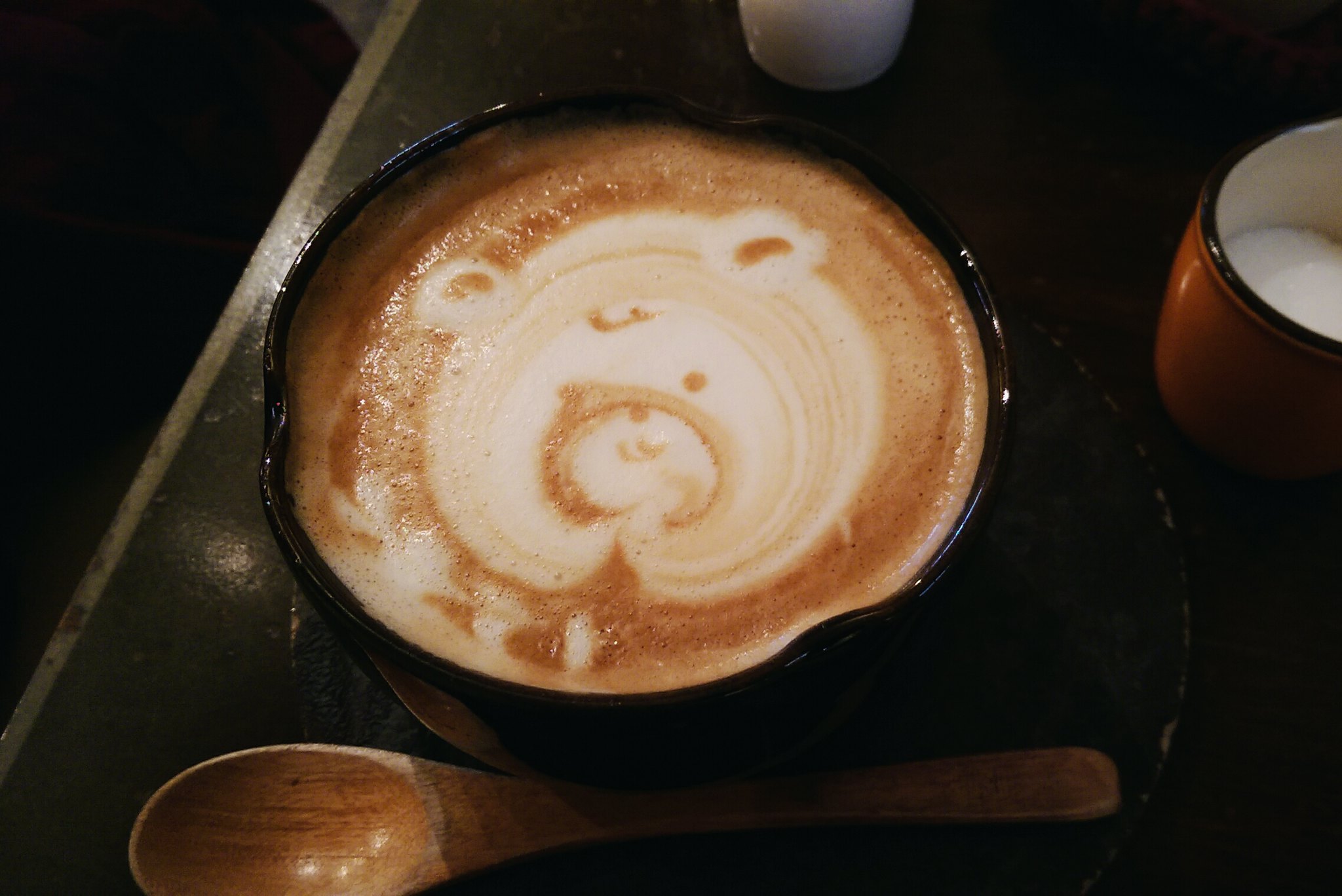 My latte came with a bear on it. I mean, c’mon. 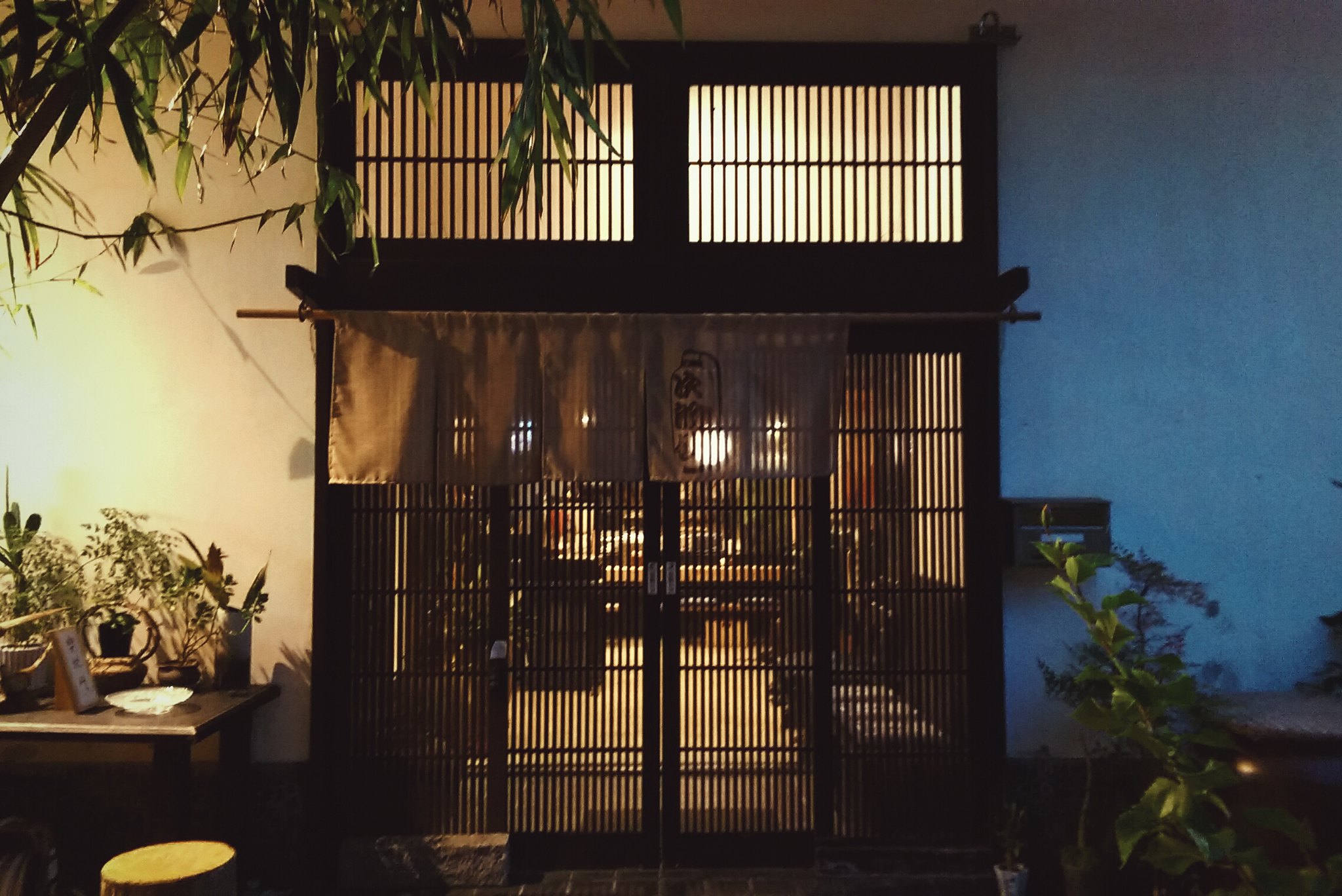 The friendly Okinawan receptionist at Spice Motel suggested Jiro-cho when I asked for a locally-loved dinner spot for sashimi and oysters. We arrived for an early meal at 5:30 — right when they opened. By the time we left at 6:30, the parking lot was full. 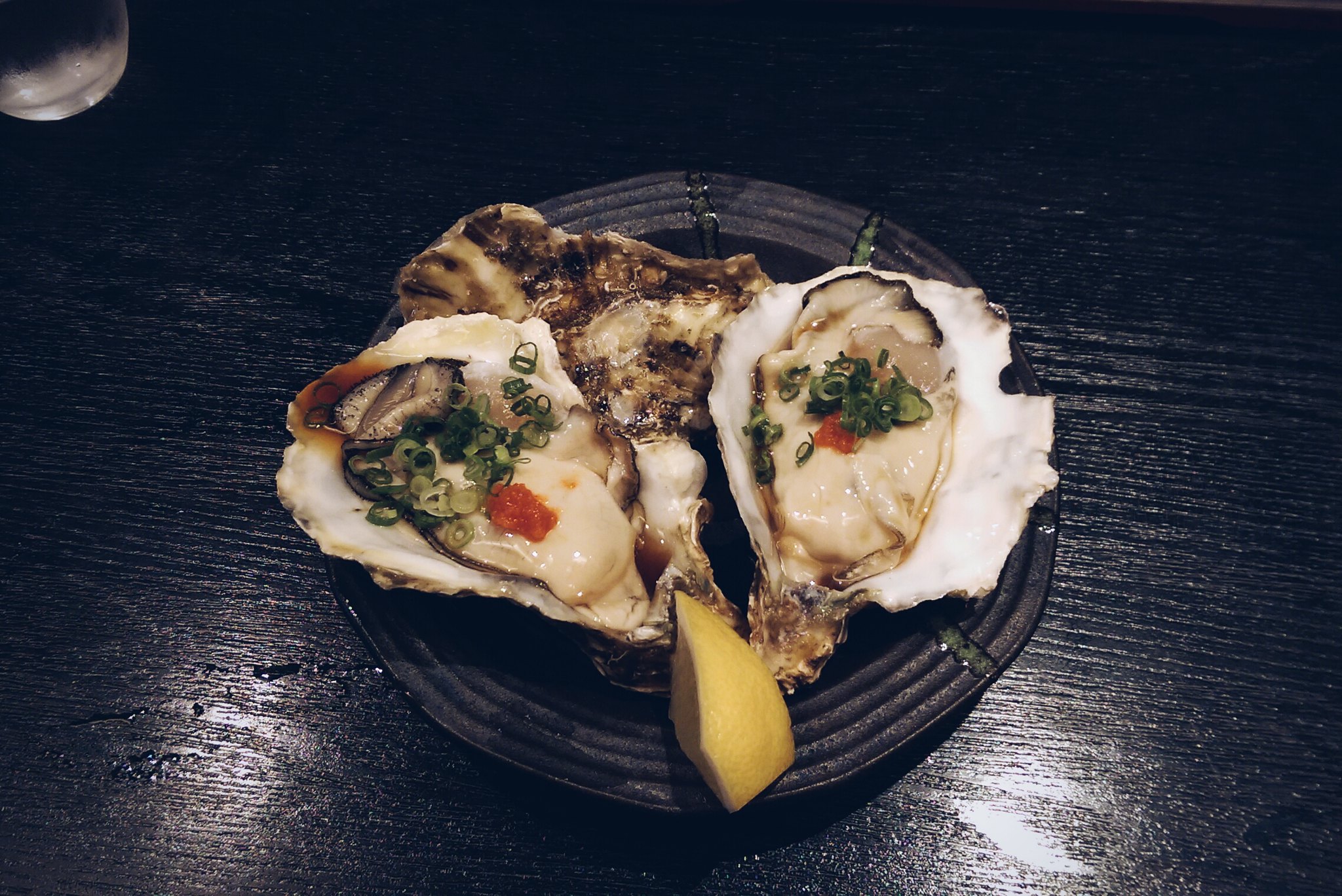 We started with huge fresh oysters, a sashimi platter, and also agedashi tofu, which I feel compelled to order anytime I see it on a menu. 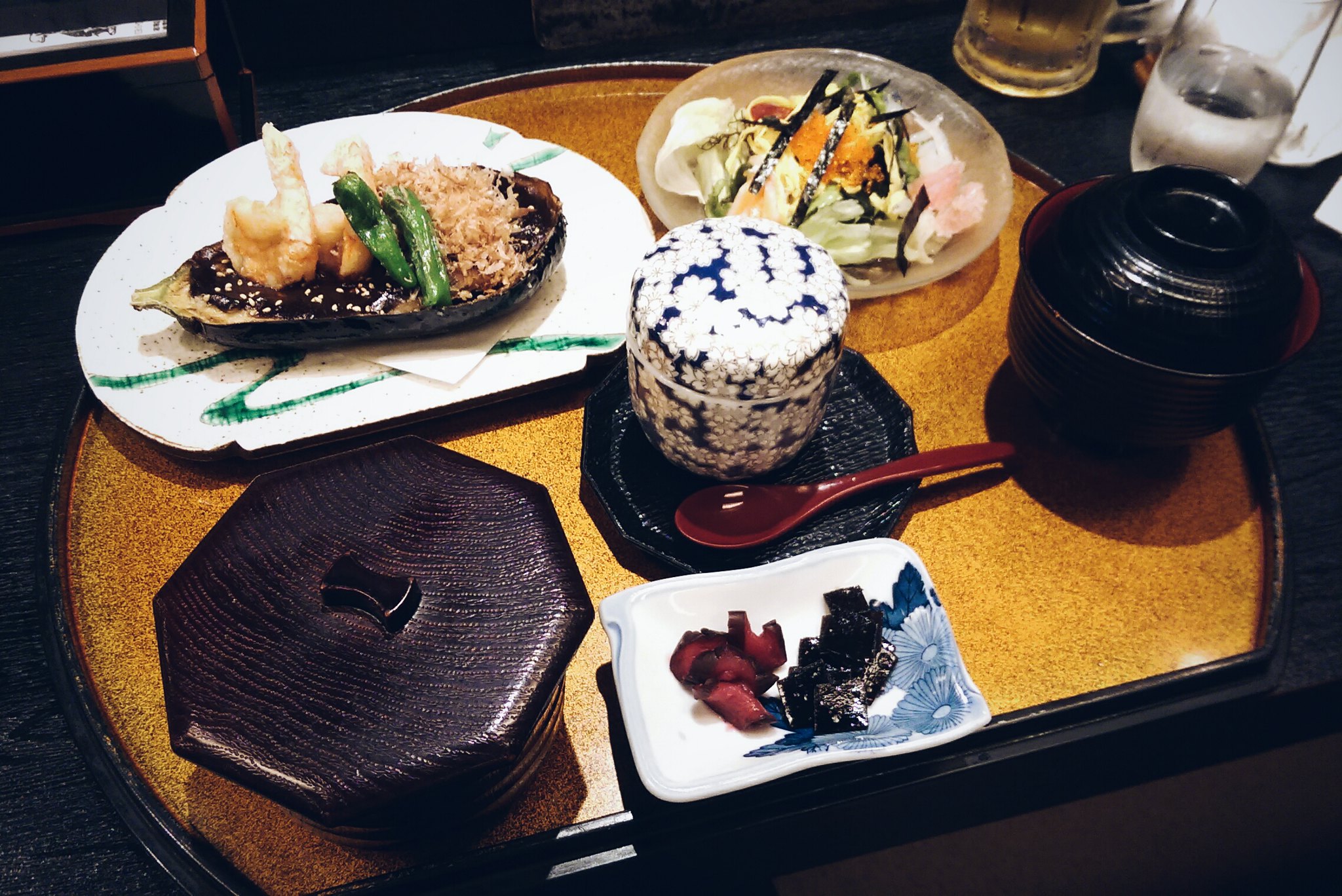 While the interior at Jiro-cho is traditional and the service is old-school, the prices are totally reasonable. Dinner for two (with beers) came to about 2,000NT. This is a place I could bring my parents and they’d be very happy. 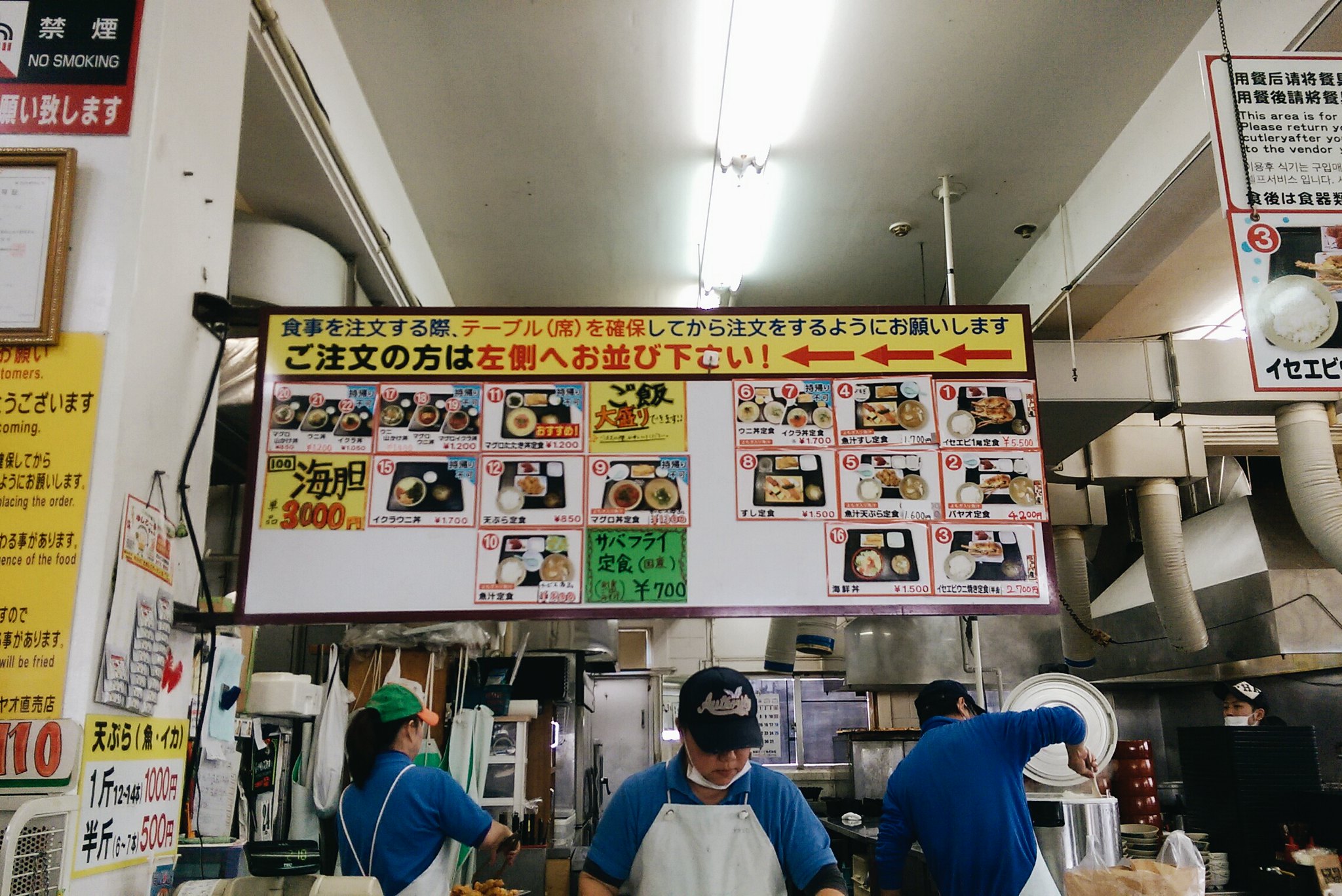 We went into Naha one day and wandered around the famed Makishi Public Market. The process there is exactly the kind of thing we hate about traveling: local vendors targeting tourists, speaking Mandarin to us, ushering us to buy seafood displayed without price tags. Unsurprisingly, we left Makishi hungry.

So again, I asked our Spice Motel connection for an alternative fish market to visit. She suggested Awase Market, which is known as a small local spot where Okinawans pick up seafood or grab a quick lunch set. 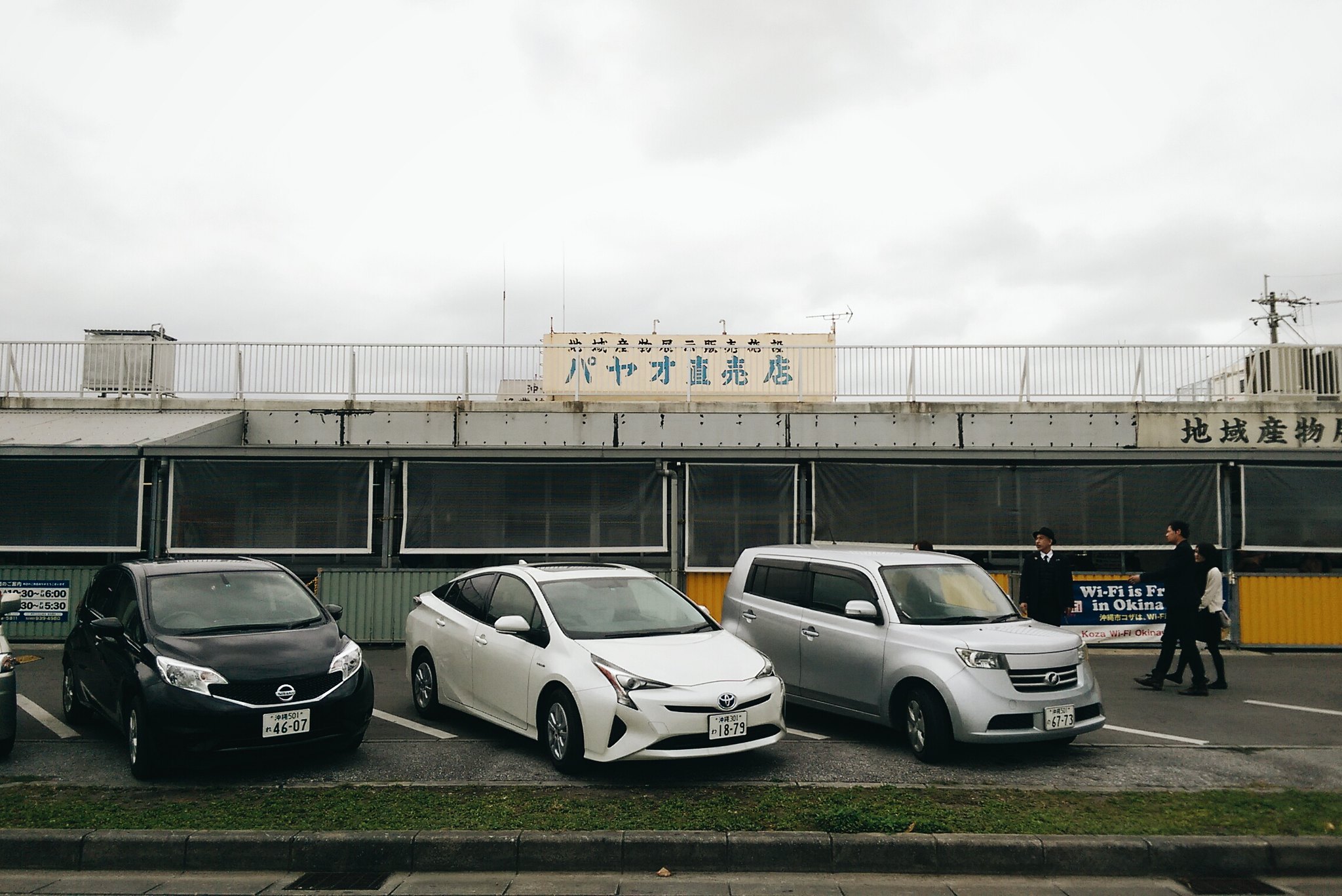 Awase Fish Market is located on the south-east side of the island inside this totally low-key building. One side sells groceries and seafood while the other side has one restaurant pumping out the lunch sets. No, it’s definitely not like Taipei’s Addiction Aquatic Development. Then again, the crowds aren’t as insane either. 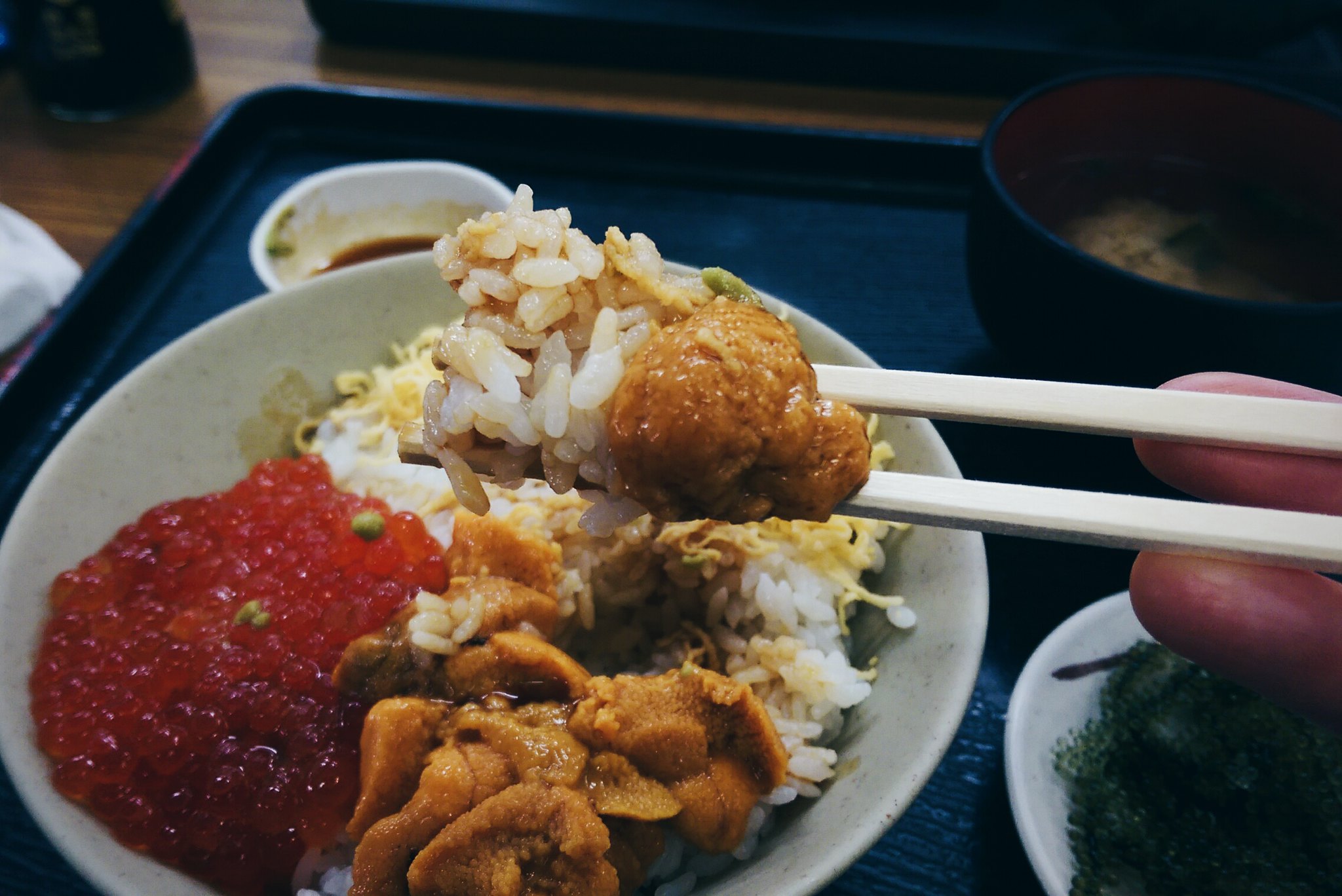 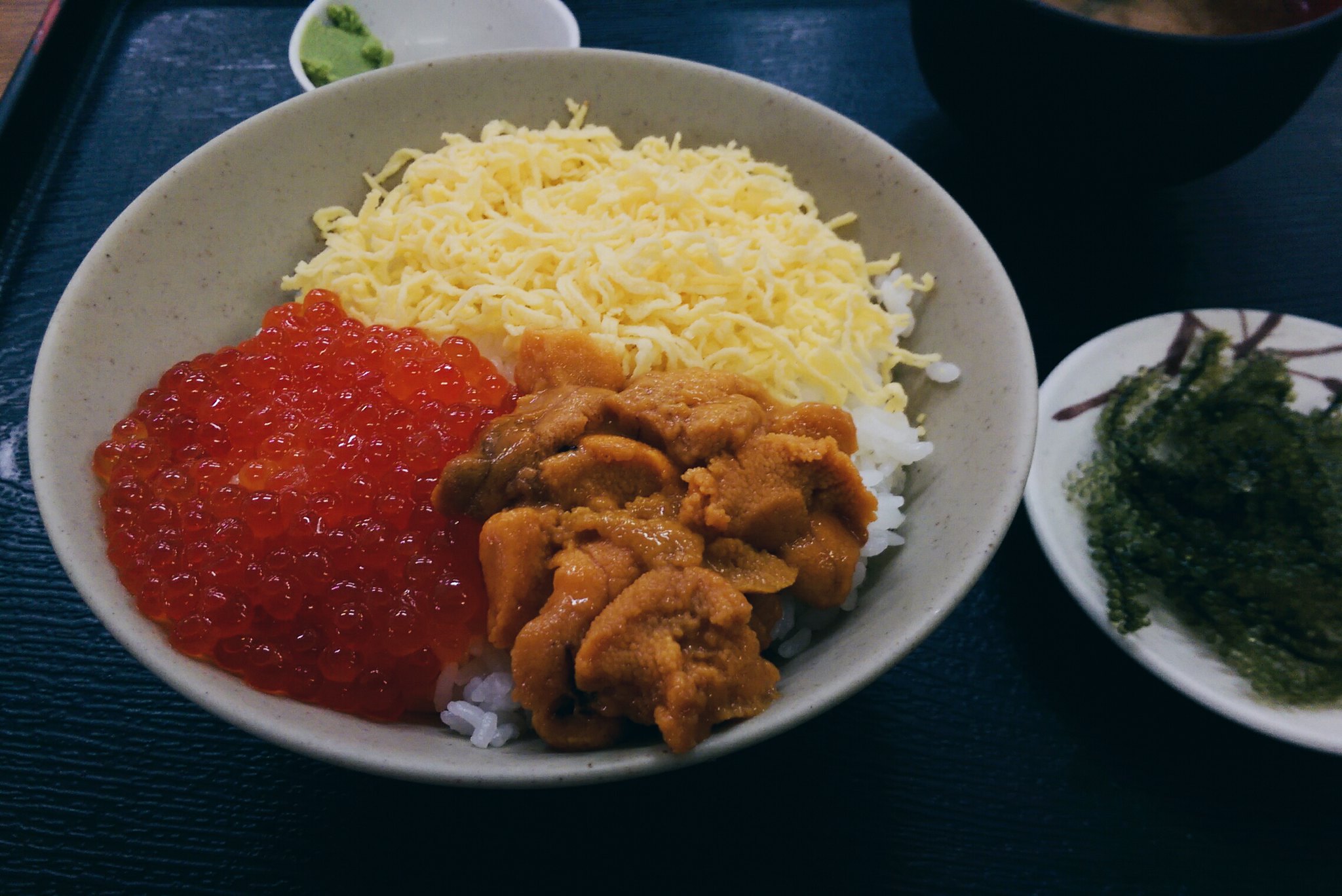 I ordered the uni and ikura bowl with a side of sea grapes and miso soup for 1,700yen. The shredded egg was a waste of space, but otherwise tasty. Husband had the baked half lobster with sashimi side dish for 2,700yen. As expected, the lobster was a little dry so he was bummed out. 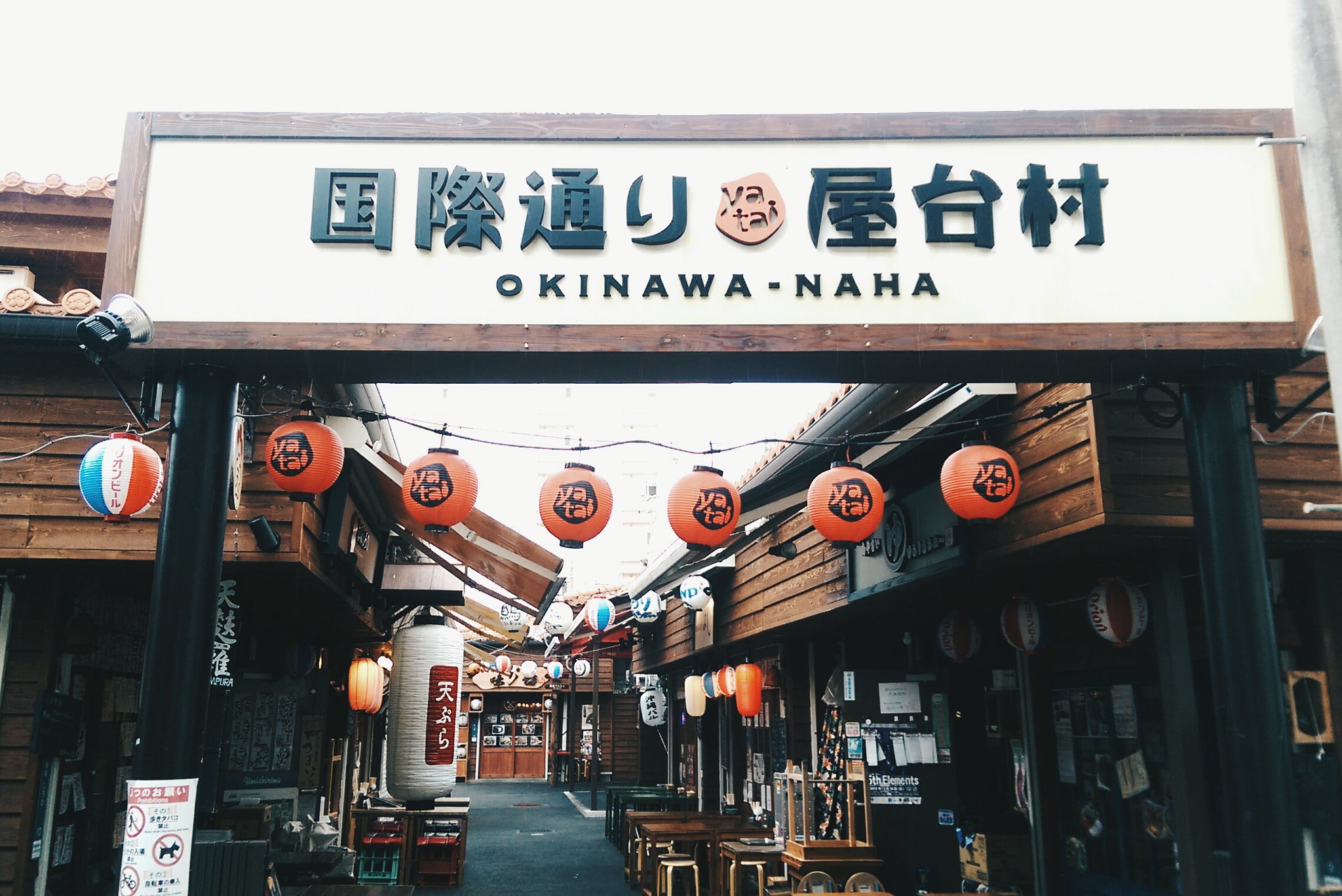 Our friend Alex suggested Kokusai Street Village for izakaya dinner and drinks, but we could only manage a late lunch since we drove into Naha. As you can see, it was a little sad and empty when we showed up but I can imagine a fantastic buzz after dark.

This is the kind of place I wish existed in Taipei — a contained space for dining and drinks that’s open late into the night. Friendly for tourists, but also a hotspot for locals. Commune A7 is the closest concept in Taipei, but unfortunately it’s only around for a year. 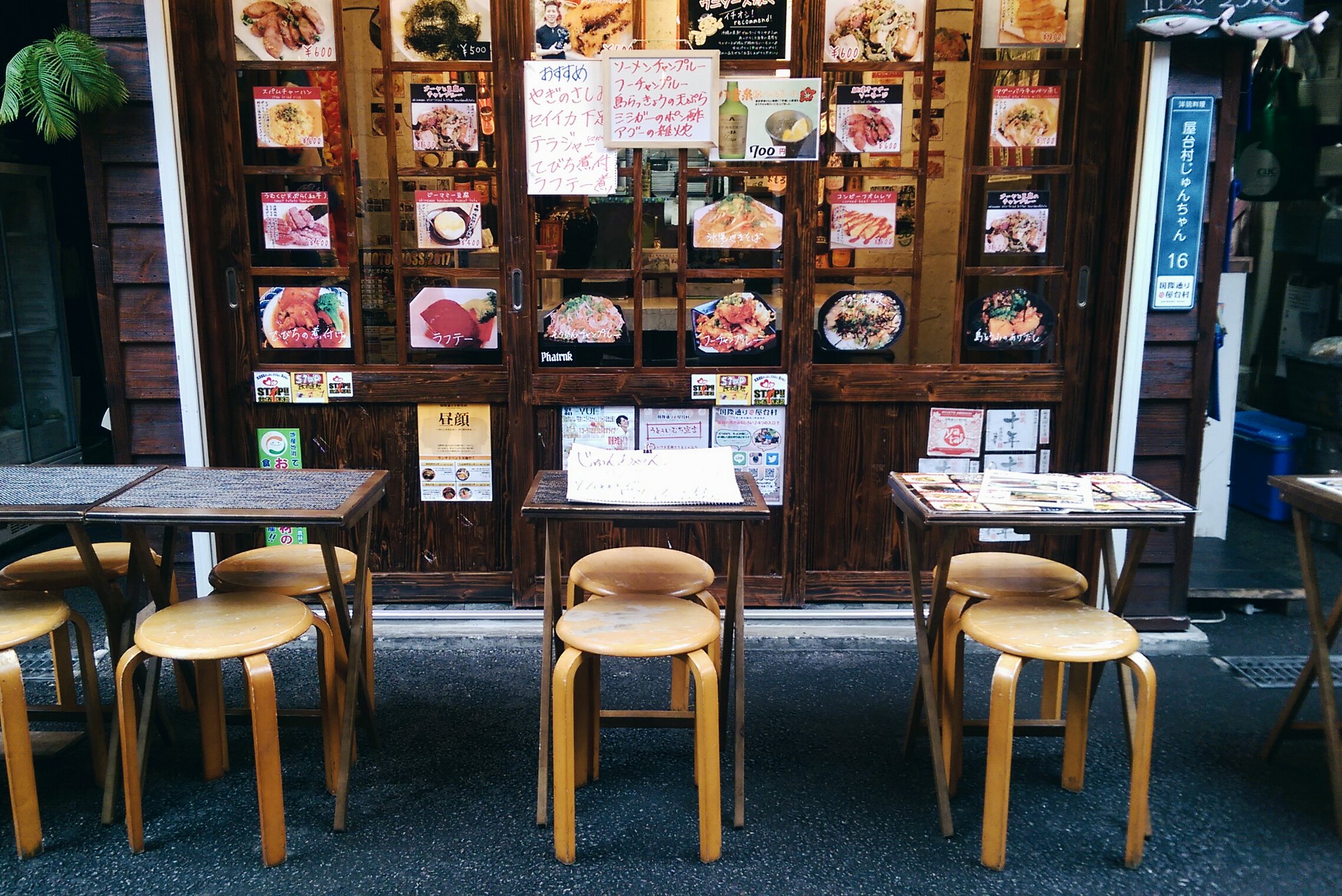 The restaurants are teeny tiny. They seat only about five or six inside, with a few tables outside. It’s not for the claustrophobic, that’s for sure. There’s a lot of variety — sashimi, yakitori, tempura, soba, bar food — so you can hop around and try a bunch of stuff. 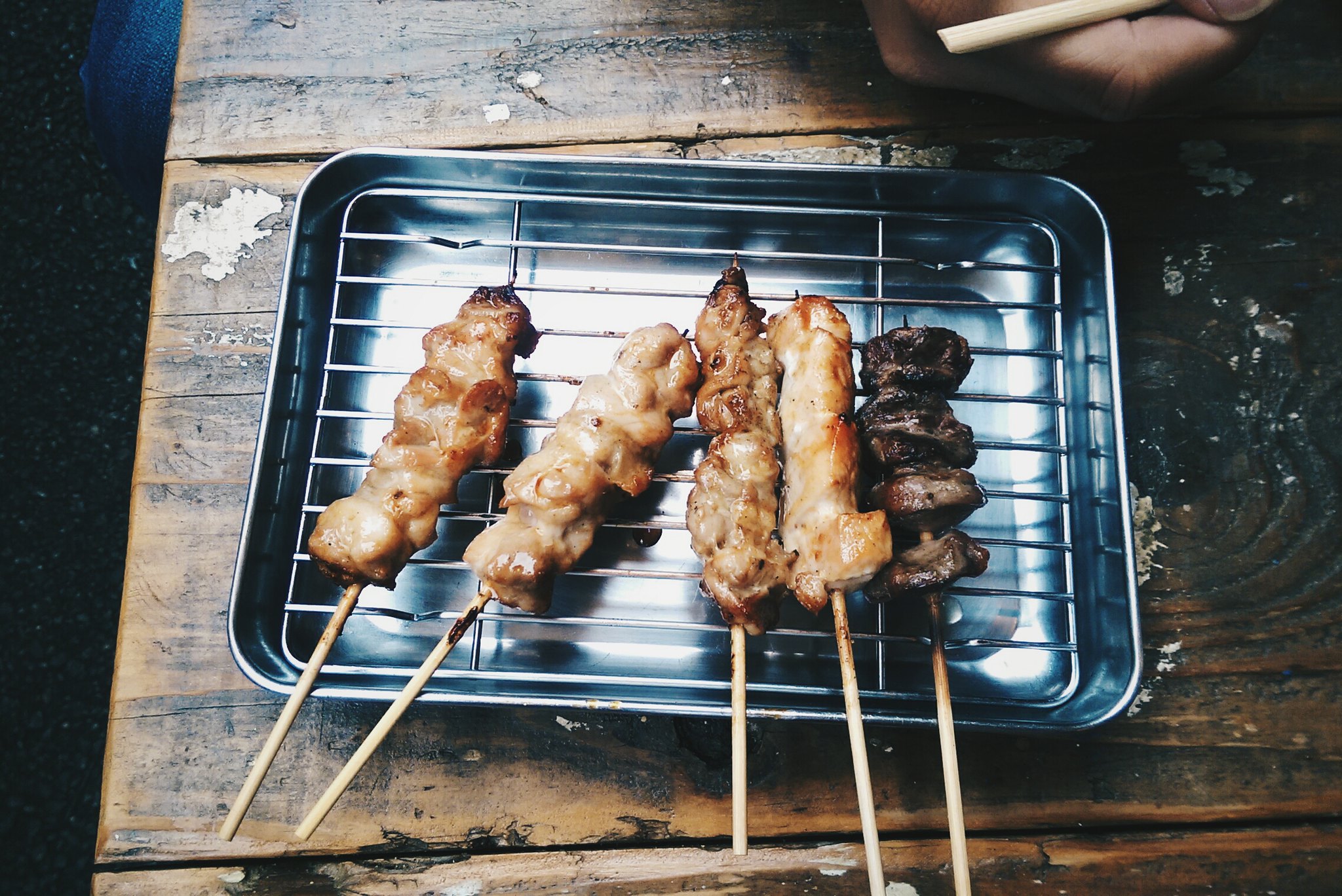 We could only pick from a couple of places still serving food at 2pm, and ended up at stall 11 for yakitori. This was the super juicy chicken skewer set. Five for 800yen. 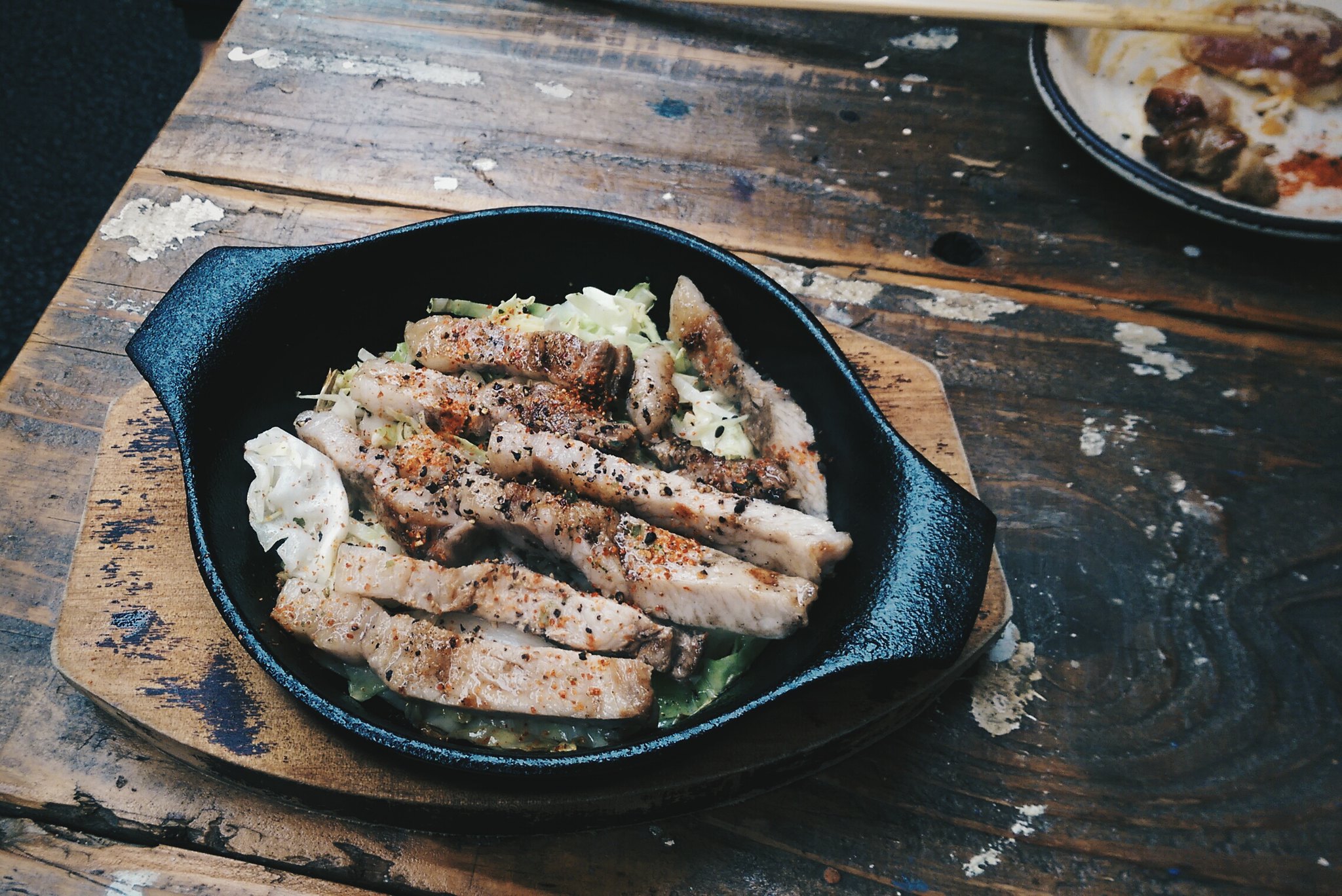 Then the Okinawa pork steak on top of sauteed cabbage for 880yen. I could have split another one — the pork was really good. 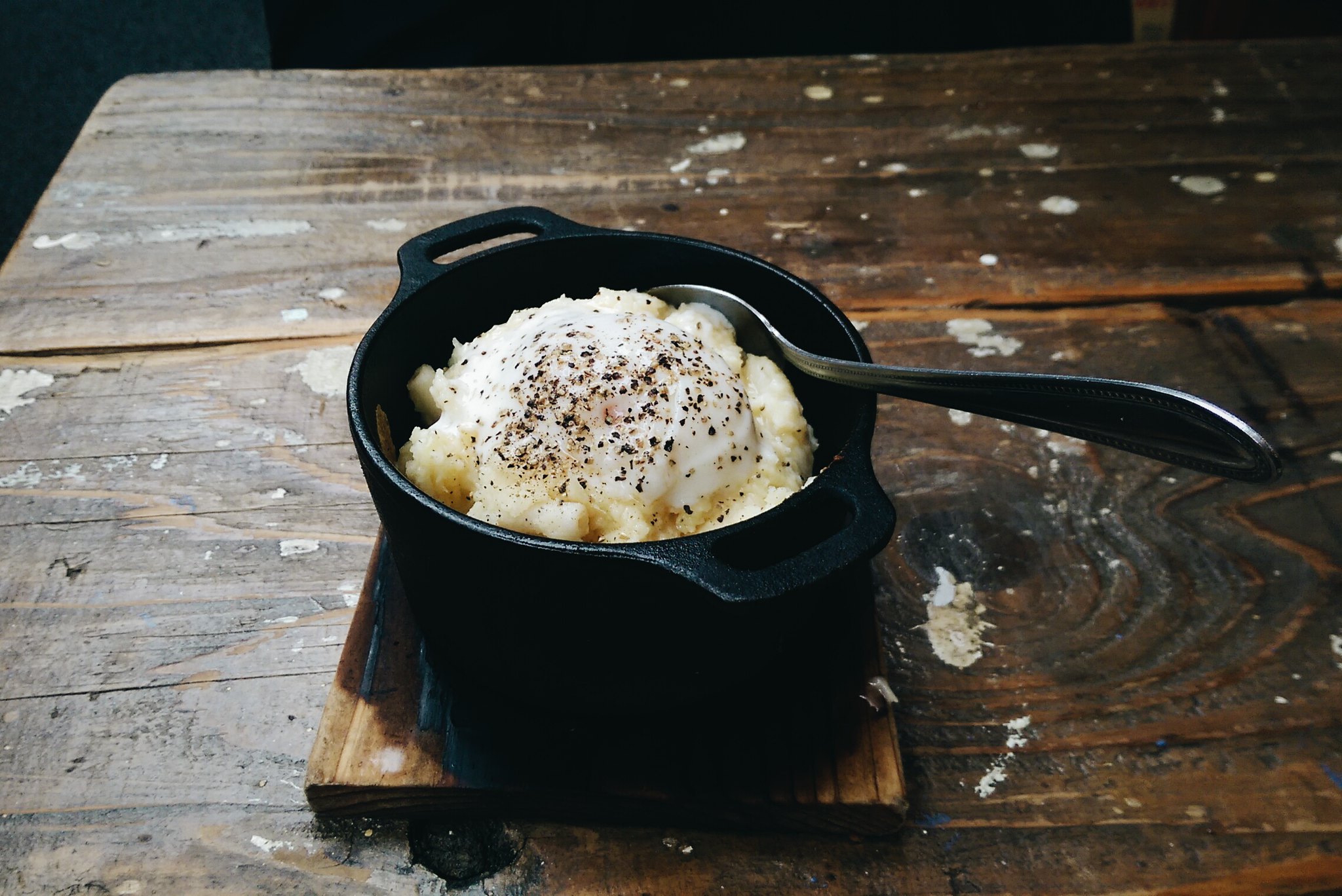 The potato salad came in this hot little pot with a poached egg on top. Potato salad is another one of those things I always order when I see it.

Needless to say, we’ll be going back to Kokusai for dinner next time. 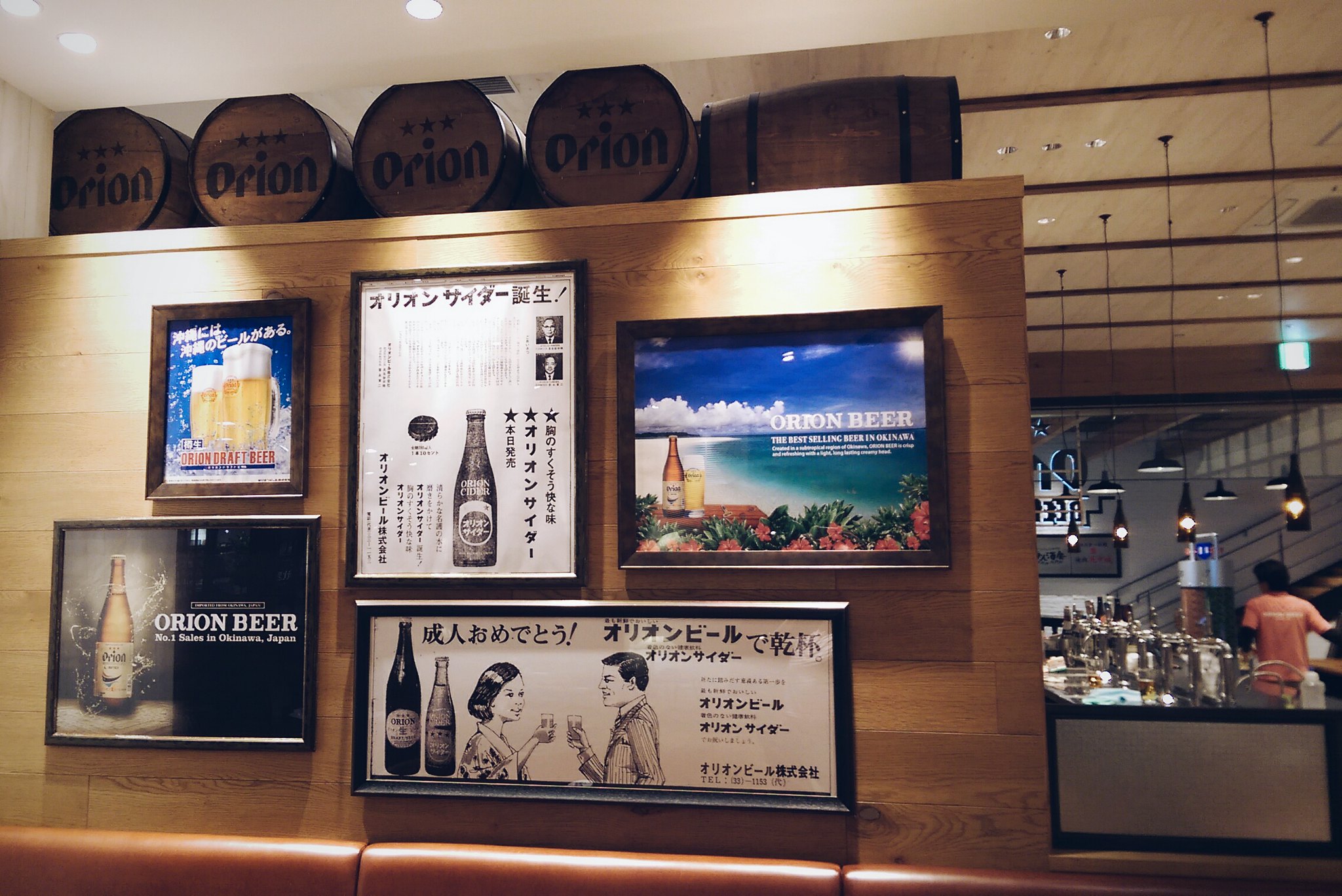 Orion Beer Hall — Staying near the Aeon Rycom mall, we couldn’t resist a couple of fresh Orion drafts at the Orion Beer Hall there. It’s also where I tried “taco rice” just for the hell of it. I know Taiwan Beer is state-owned, but I really don’t understand why they can’t open a shiny, mid-priced beer hall like this one. 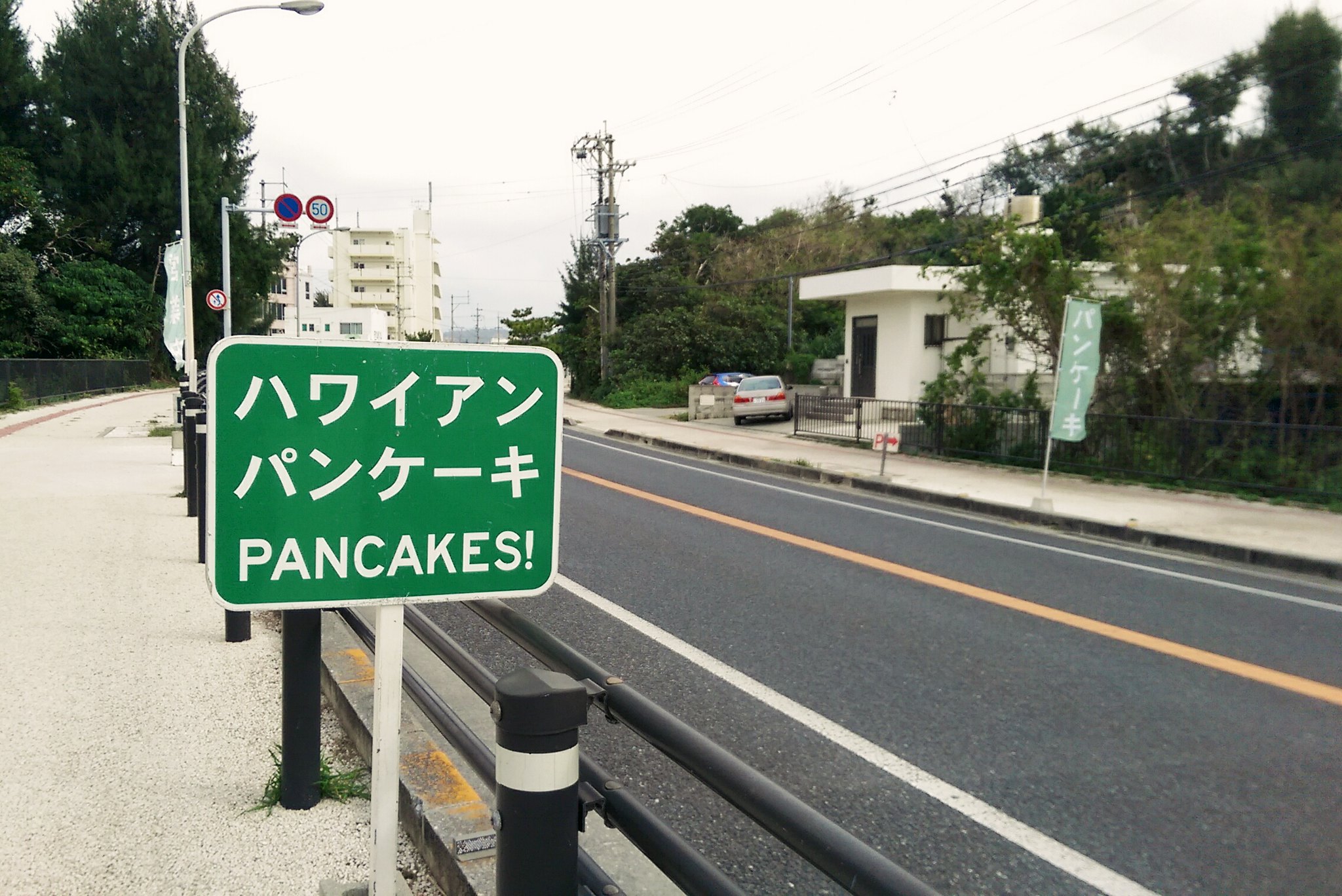 Hawaiian Pancake House — Taipei doesn’t have a dedicated pancake house, so I really wanted to drop in. This place is popular with tourists though, so if there’s a big crowd outside you might want to skip it. By the time we arrived, the signature macadamia nut cream pancakes were already sold out, but the chocolate chip pancakes were good too. 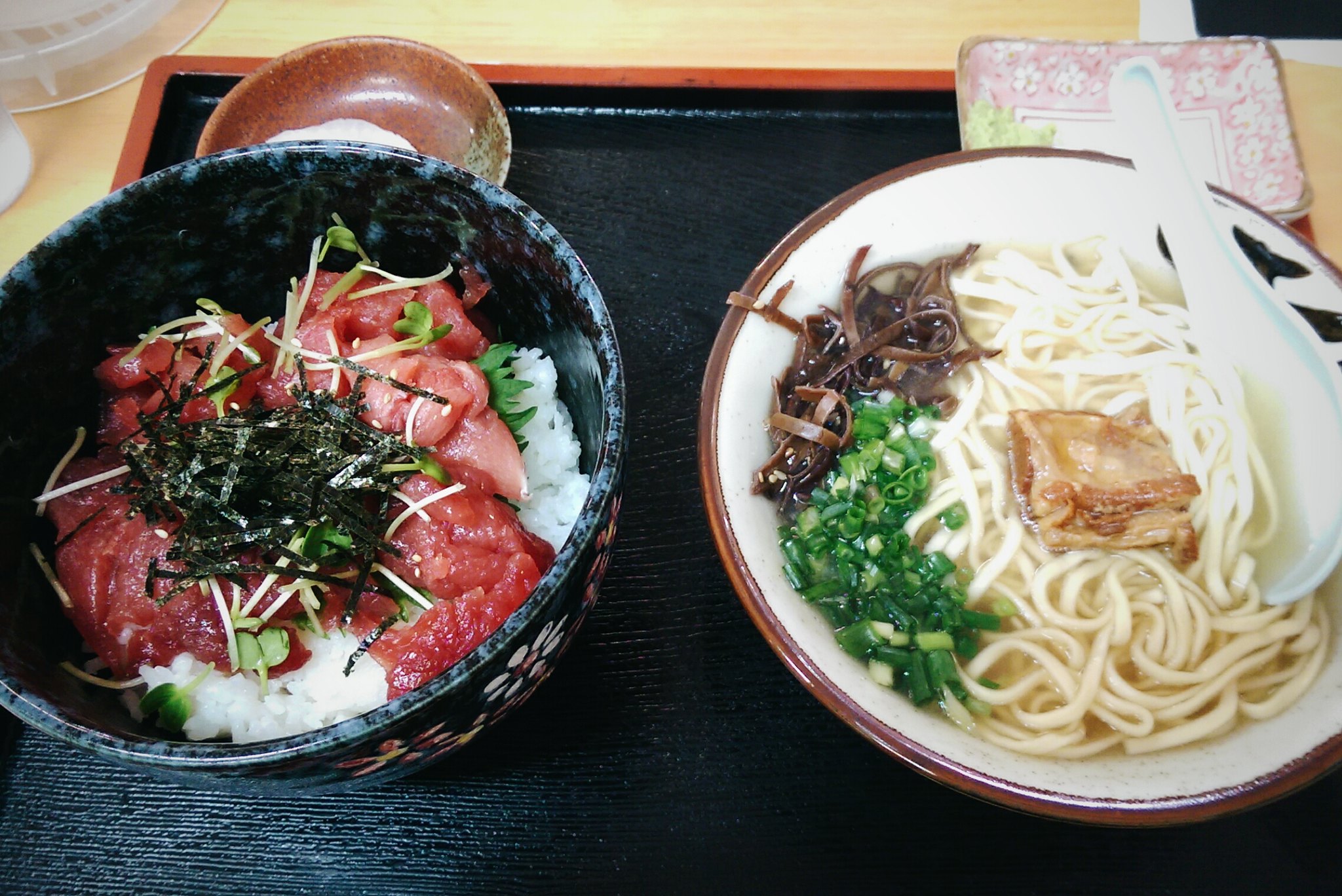 Kame Soba — you hear a lot about Okinawa soba. But seriously, it’s so boring. Maybe we’re eating it wrong? Or maybe it’s a comfort food you only crave if you grew up in Okinawa and your grandmother made it every weekend from scratch? But hell, this was a sad lunch. I think the worst part was my fish bowl was very warm.

Finally, avoid Mihama American Village at all costs — this entire place was a massive waste of time. Just terrible. I walked around trying to find some redeeming factors, but came up short.