Something Very Wrong Is Happening at Taiwan Tourism Bureau

Hey, quick question! Do you think Taiwan’s government-run social media efforts should be this amateur, unprofessional and embarrassing?

Is it too much to ask that the person representing Taiwan on social media run a simple spellcheck before posting about Kavalan? The word “whisky” is right there in the image.

Or perhaps the person could ask themselves, does this topic make Taiwan shine? Or does it make Hong Kong shine? Or Japan shine?

This one below is particularly frustrating. First, it uses a terrible photo from the Taipei location of the Singapore restaurant chain Paradise Dynasty. (Could not even be bothered to find a photo from Din Tai Fung, huh?) And those exasperating typos: “desert” and “ziao long baos”. The Twitter version has already been deleted but the Instagram version is still online here. [Update: they’ve also deleted this post.]

Also note the lack of photo credits in all of these posts except in the case of the Arashiyama one.

And with all the possible topics the Taiwan Tourism Bureau could be sharing to promote Taiwan on social media, do you think these are suitable? Or are they completely tasteless and ridiculous?

Gosh, what about just putting any effort at all into writing a caption because that’s your job?

Or fact-checking before posting? Jiufen was not the inspiration behind Spirited Away. Here’s a clip of Miyazaki saying so on Taiwan’s TVBS news.

The shortlink on all these posts goes to the same website — taiwantourism.guide — which promotes a long-running competition for a free round-trip ticket from NYC to Taipei.

Yesterday I just couldn’t take it anymore. I shared a few of the most humiliating posts from @triptotaiwan on Facebook. A few hours later, this happened: 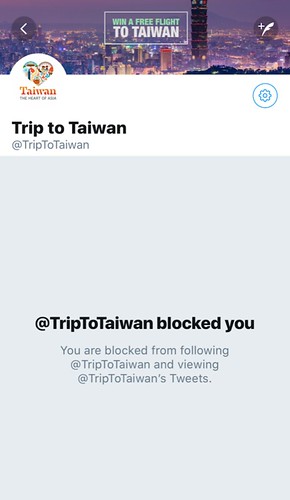 What a mature response from a government-run account. Especially when they seemed so receptive to feedback back in December 2017: 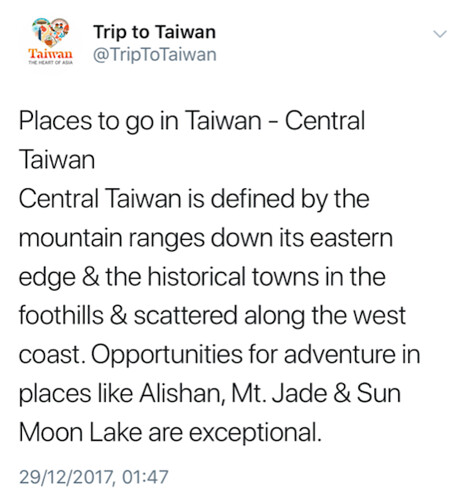 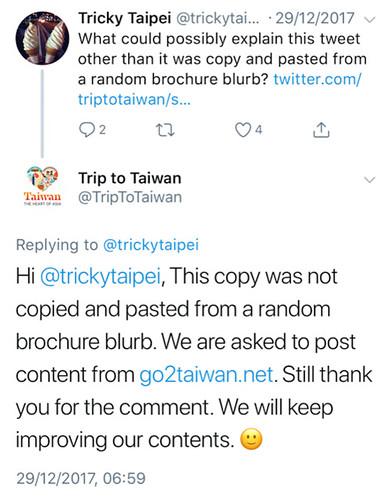 Aren’t they basically confirming they were told to cut and paste from their travel website?!

Poking around online, I found 7 other official government-run Instagram accounts representing the various overseas offices of the Taiwan Tourism Bureau. The Bureau runs 13 overseas branch offices in total. You can see the official organizational chart here.

The only account with a significant follower count is the notorious @triptotaiwan with 13.4K. (Oh, great.) Next is the India account with 5,968.

To compare, @indtravel is the official account of Indonesia’s Ministry of Tourism and it has 484K followers. Visit Japan has various regional accounts but its main international account @visitjapanjp has 106K followers. Finally, the @imagineyourkorea account by the Korea Tourism Organization has 60.8K followers. 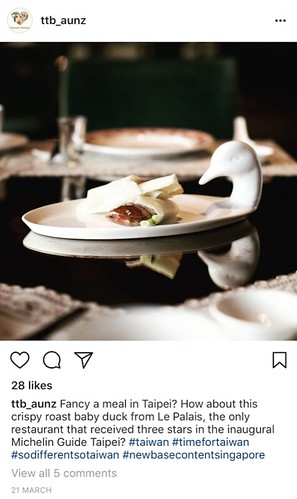 I guess this work was part of a bigger campaign for the Australia and NZ office under the slogan, “So different! So Taiwan!” This is the 2017 case study from the NewBase archives.

And here’s an embarrassing story about NewBase: Yesterday I messaged with a freelance blogger/marketer who worked with the NewBase team in mid-2017 on the Taiwan account. She said:

“I had to write simple copy for them as suggestions for Facebook and Twitter. They gave me topics. I only wrote two copy for each. If they were happy with it and published then I got paid per topic. I haven’t worked for them for a long time since they seemed to not have any idea. They even asked me to find photos for them! I gave them a lot of pointers. They honestly don’t know much because they even asked me what I use to schedule social media posts…”

But someone at the Taiwan Tourism Bureau must be satisfied with their work. It looks like NewBase Content is getting paid for two more “major campaigns” in 2018. Press release here.

Finally let’s get back to @triptotaiwan and the taiwantourism.guide website. It looks like Taiwan Tourism Bureau hired an agency in New York called The Tiger Party. The agency is owned by a Taiwanese guy named Rafale Chang.

The Tiger Party produced this Times Square billboard campaign that was essentially a giant FaceTime between Times Square and Taipei despite there being a 12-hour time difference between the two cities which meant the live feed on the Taipei side happened at midnight.

I’m curious how they measured the success of this campaign against all the government funds invested. How many people actually participated on the New York side who weren’t affiliated with The Tiger Party or Taiwan Tourism? (I’m guessing there were exactly zero casual passersby who happened to wave into the camera at midnight in Taipei.)

The Tiger Party was also paid to create the taiwantourism.guide website. It’s yet another unimpressive and unoriginal government-paid travel website to throw onto the heaping pile of Taiwan government-paid travel websites. By the way, we know The Tiger Party built the site because the whois search on the domain is registered to them. They didn’t transfer ownership to Taiwan Tourism Bureau. 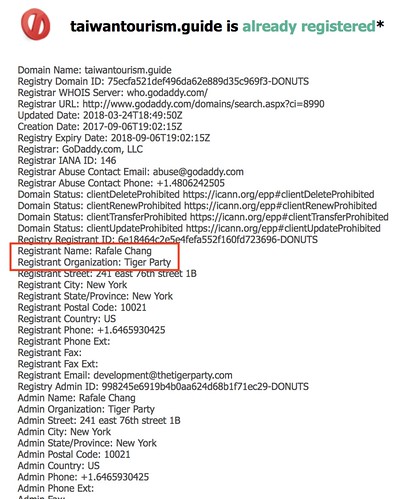 The funny thing is I know of one instance where The Tiger Party turned down professional help. I also know of an instance where they approached a blogger specifically about their Taiwan Tourism project…then never responded to her reply.

This complete disinterest in content strategy by everyone involved with Taiwan Tourism (employees and vendors included) is probably why poor Taiwan has so many slogans, websites, social media accounts and useless but flashy advertising campaigns.

So my big questions for the Taiwan Tourism Bureau…

Here’s Part 2 about the work overseen by the Taiwan Tourism overseas branch in Frankfurt.

Update: Since this article was originally posted on April 18, the @triptotaiwan editor has changed and the posts included below have been deleted on Twitter and Instagram. 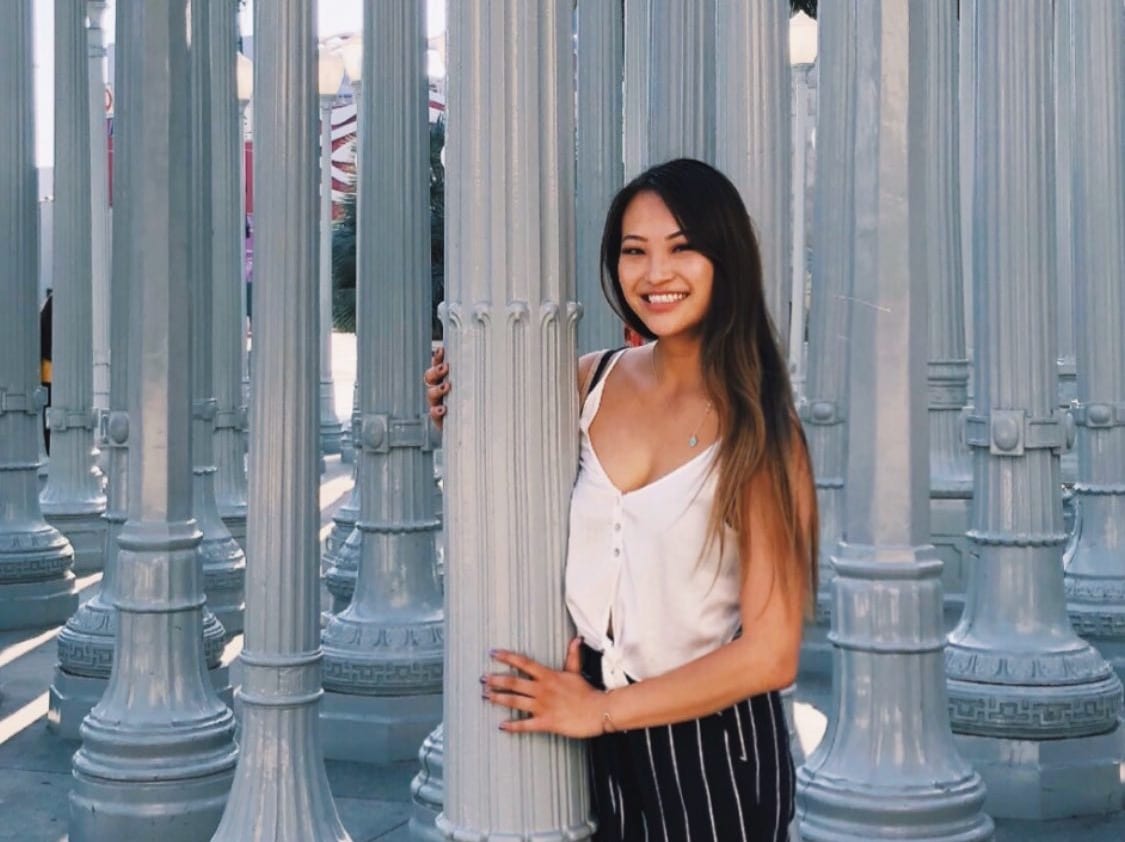 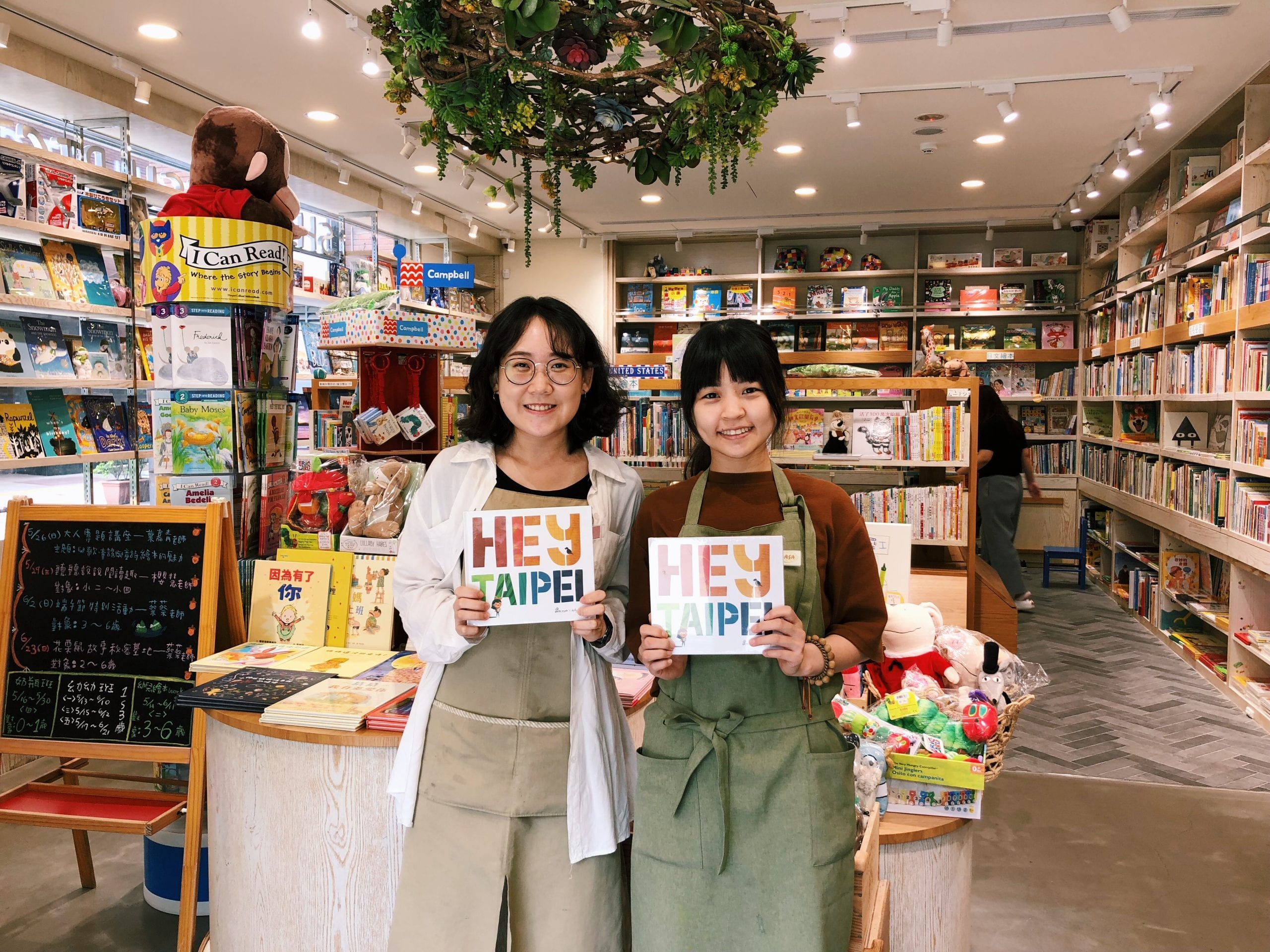 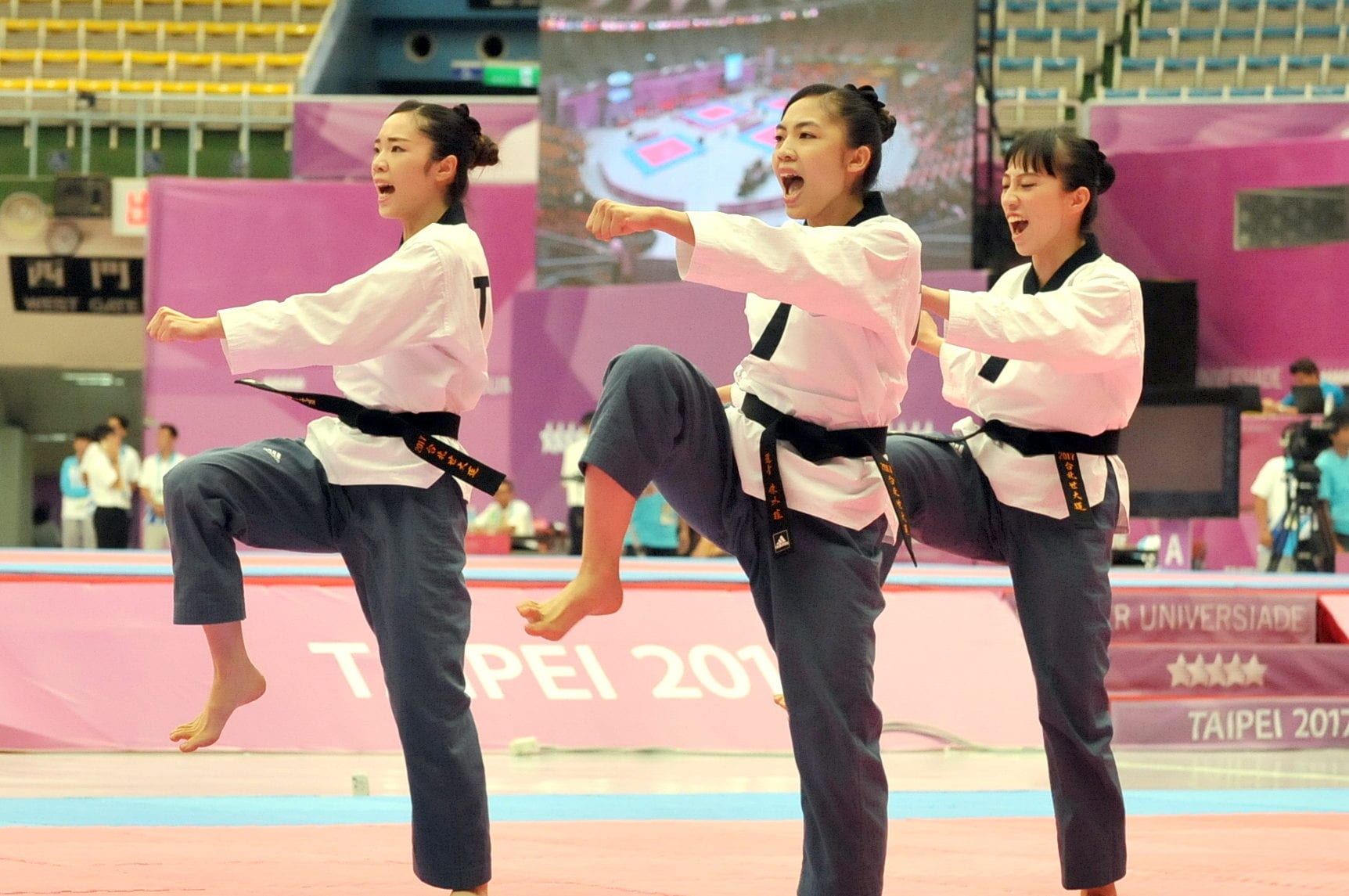