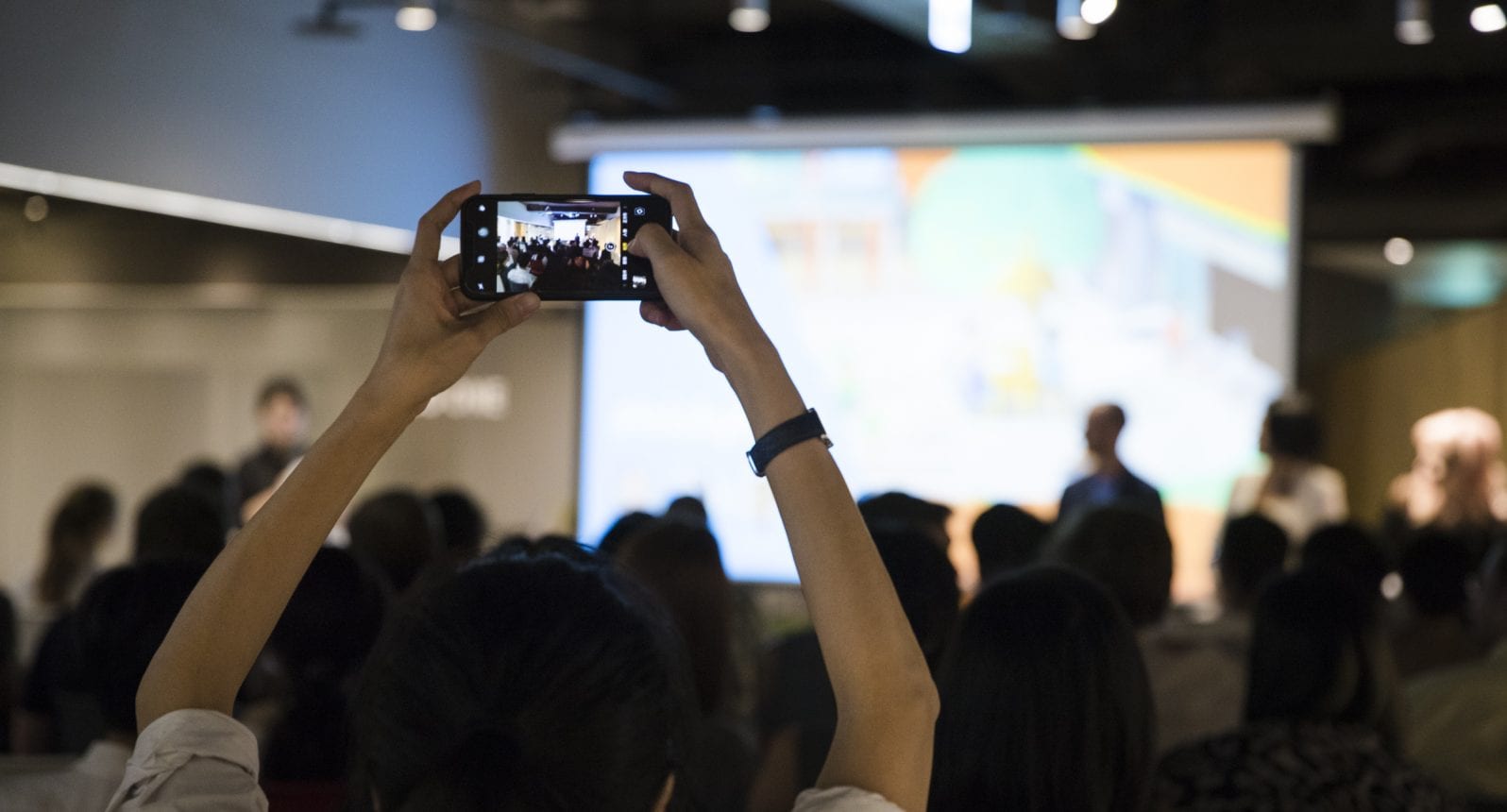 Running Tricky Taipei has been so much fun this year. Just so much fun. I don’t know if I’ll have another one as eventful as this, so I’d love to relive some of this year’s most hilarious and most maddening stories before 2018 ends. Ready? Let’s rewind…

In March, I wrote a post reflecting on my experience giving birth in Taipei. It was exactly the kind of English-language post I wish existed when I was pregnant, with the kind of information I wish I had available.

I feel like maybe this post has made the biggest impact out of all the posts on this blog. I still receive emails from women asking follow-up questions, or just writing to say hi and share how the post helped them. I also met a new consulting client through this post which is always nice!

The first taste of drama! Back on April 17, I called out the Taiwan Tourism Bureau in this Facebook post:

A few hours later I was blocked by the @triptotaiwan Twitter account. The story was picked up on Facebook by Taiwanese media personality Lucifer Chu, then a few hours later by Apple Daily. That night I put it all down in a post, and wrote another one about more social media idiocy from other TTB offices abroad.

It’s crazy to think that a story from an English-language Facebook page with less than 1,500 followers would make it to the local news, but it did and no one was more surprised than my parents. (“Your blog is in Apple Daily?!”)

A week later, @triptotaiwan unblocked me and replaced the person in charge of the account. You’d think that was satisfying enough, but it didn’t end there.

Almost four weeks later on May 13, the Chinese-language translations of the blog posts (here and here) inexplicably went viral too. Together the posts were shared more than 10,000 times on Facebook and this site got 80,000 hits over two days. The story also appeared on SETN, The News Lens, TVBS, Central News Agency, Yahoo and TTV.

I even did a phone interview with a journalist for the Taipei Times — they were the only media outlet to contact me instead of just lifting the content directly. The result was a feature article in the print edition. Wooooo! 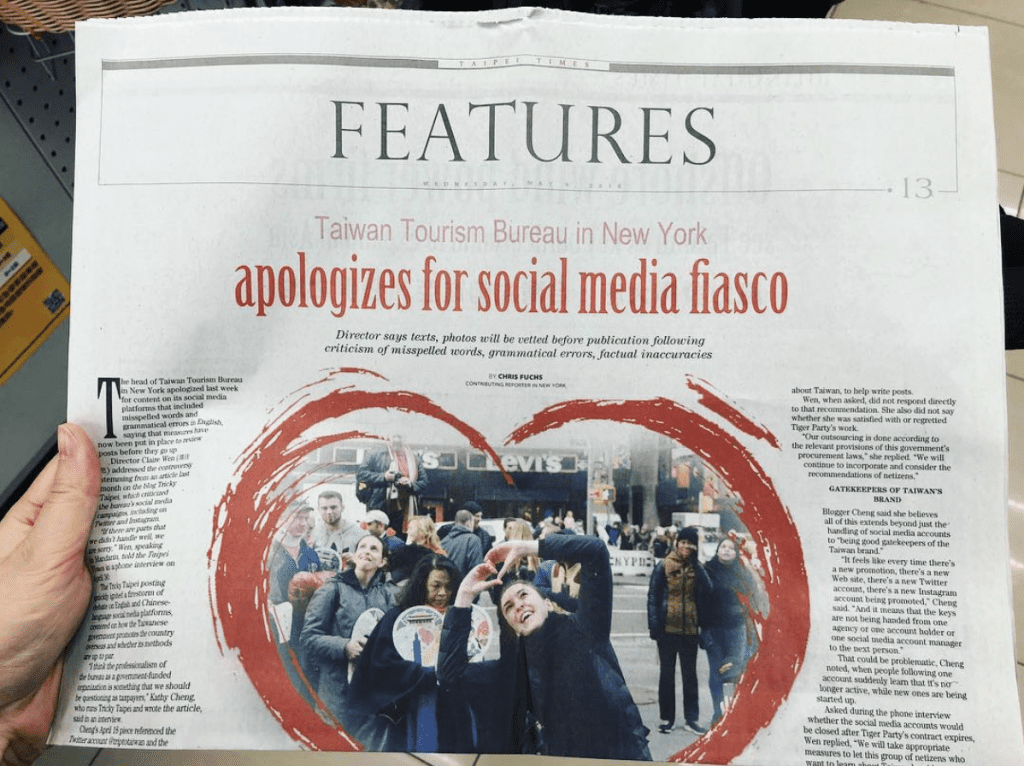 The only downside was I had to pay my blog hosting company for all the extra page views. FYI, English-language blogs in Taiwan don’t make money. They actually cost money if you use WordPress and have your own URL. I use Google Ads now, but it doesn’t do much. Hey, click on a couple of ads if you wanna help offset the costs!

The Worst of Government Social Media

This year I had a good time leading collective headshakes about social media efforts from our government. These are a couple of the more memorable posts. One’s from the Ministry of Foreign Affairs, and the other from the President’s resuscitated Instagram account.

The Launch of “Tricky Talks”!

The single most nerve-wracking thing to happen this year was the very first Tricky Talks event on July 5. Next was the second Tricky Talks on August 22.

Why did I decide to do Tricky Talks? I ask myself the same question whenever I’m desperately trying to get the word out! I guess I wanted to recreate the atmosphere of the events I used to attend when I was working in New York. And I wanted to see if Taipei could sustain an event series in English for its own professional community.

There’s so much talk about the brain drain and constant chatter about Taiwan’s young people leaving the island for better career opportunities abroad. I wanted to do something to prove it’s not that tragic. That yes, there are many talented, interesting, globally-minded young professionals still based in Taiwan and we can all get together to have a beer, listen to a panel and share ideas in English.

When I think back, the first event started off a little rocky — but the beer helped! There was no hiding behind the keyboard and no “edit” button for me. We juggled two microphones between the five of us on stage in front of a packed house of 65 at Woolloomooloo Xinyi.

The second event happened just six weeks later in a bigger venue with an audience of 100 people. Since the theme was “Taiwan Culture Goes Global” we served Taiwan craft beer, pineapple cakes, radish pastries and Taiwanese “renbian”. It was an insane amount of work but also an insane amount of fun. See the full photo album. 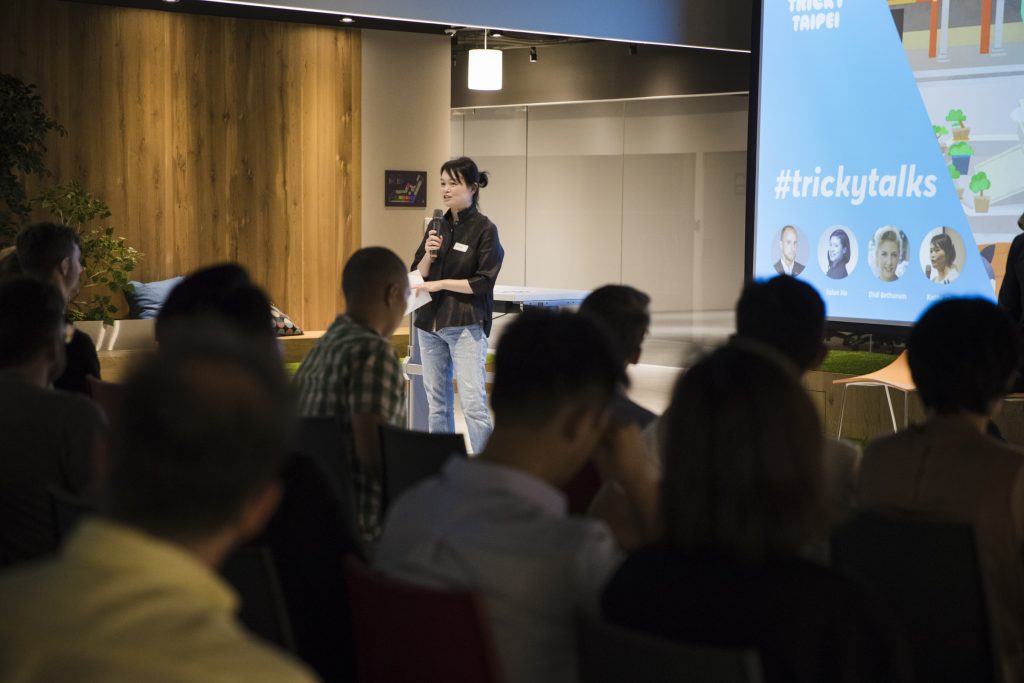 The third and last event for the year, titled “The Kavalan Story”, happened on December 11. (See some photos here!) It was the first one I hosted without my good friend Didi Bethurum, who moved back to the States in November. It has to be said: there would be no Tricky Talks at all if it weren’t for Didi who planned the very first one with me over stacks of soufflé pancakes.

The Failed Search for Winson

Ah, Winson. Elusive, mysterious Winson. The man was found thanks to the power of the Internet, but he refused to play ball — even after friends of his friends tried to get in touch. To this day the @taiwan handle remains blank, his deer in headlights face looking back at us. This could have been such a happy ending! Ugh.

A Plea to the Taipei Times

I’m not sure what I expected to happen when I collected reader opinions and did a background check on the Taipei Times. But I definitely didn’t expect nothing to happen.

The worst was when I called the editor of the newspaper I was told by her assistant she was unavailable and I should email my questions. Then after I emailed my questions, I received a response in Chinese, not even in English, that “since they receive so many queries, it’s impossible to respond to each one”.

I’d still like to know the answers! Wouldn’t you? Or in lieu of those answers, I’d like to hear that a crazy rich person is buying out the paper and saving it for all of us.

A Reality Check for Gogoro

I’m a big, big fan of Gogoro, but damn, this needed to be said. Gogoro has an entire marketing team devoted to Chinese-language PR and social media for the Taiwan market, but this year there was a 4+ month gap on their global social media accounts, during which absolutely nothing was posted in English.

Since mid-September, they’ve been posting sporadically but there have been too many typos and grammar errors to believe they’re taking their global marketing efforts seriously. I mean, one tweet had a #smartscotter hashtag. This would have easily won the award for “Most Stupid Typo”.

Oh, where to begin with the #Strain…

This was another TTB fiasco that blew up all the way from New York. I still can’t believe that approximately $300,000USD in taxpayer money was spent on wrapped subway trains for a month. Trains that people in New York say sometimes didn’t even run, and some days were taken out of commission.

My critique on Facebook wasn’t shared widely (just 27 times), but still managed to get written up by Apple Daily and ETToday. The coverage then prompted two opinion pieces from Taiwanese people in New York. One published in CommonWealth’s Crossings blog and the other in LTN.

No surprise, the TTB in New York went into defensive mode, as did the designer, MengChih Chiang.

She wrote an article in Chinese to defend the fact there wasn’t a single call-to-action or URL on the three-car train. She argued if people want to learn more, they can go online anytime to find information. (What?!)

She also defended the hashtag “TaiwanSTrain” ignoring the fact everyone read it as “taiwan strain”. And she wrote without a trace of irony, “This is the most beautiful, most discussed and most popular train that the Tourism Bureau has ever done.” Can you imagine a designer giving these excuses if the client was a company and not a government organization?

Oh, and the prize of a free plane ticket to Taiwan? We still don’t know who won.

[Update: TTB finally announced the winners 13 hours ago on this Instagram post. Both are Taiwanese or Taiwanese-Americans.]

Last but Not Least, the Launch of Hey Taipei! 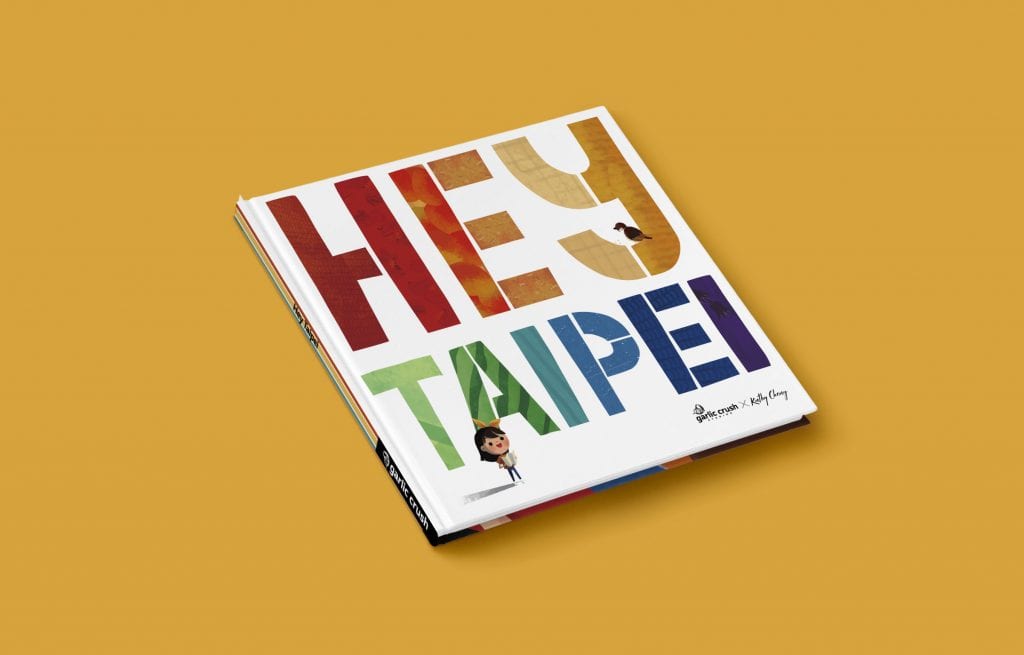 The crowdfunding campaign launched on zeczec (Taiwan’s Kickstarter) on December 20 at 8pm, and reached its target in 3 days! I’m so proud of this book and I hope lots of kids in Taiwan and overseas get to enjoy it. Here’s a post I wrote about how the book came about if you’re interested!

And that’s it! Thanks so much for reading this year, attending the events, sharing posts and commenting. See you in 2019! 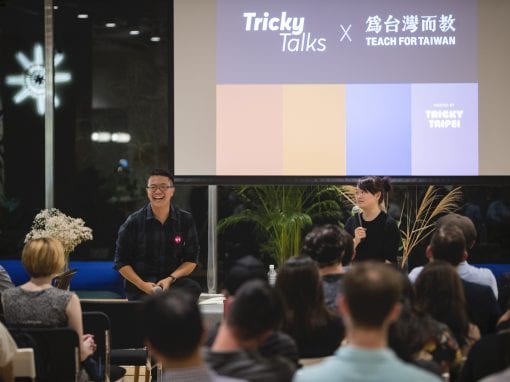 Highlights from Tricky Talks with Teach For Taiwan 為台灣而教

END_OF_DOCUMENT_TOKEN_TO_BE_REPLACED 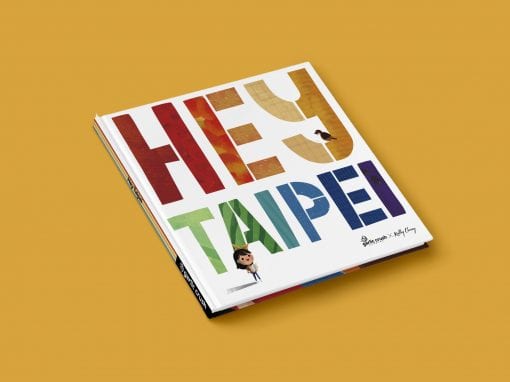 Including stockists in Taipei, around Taiwan and online.

END_OF_DOCUMENT_TOKEN_TO_BE_REPLACED 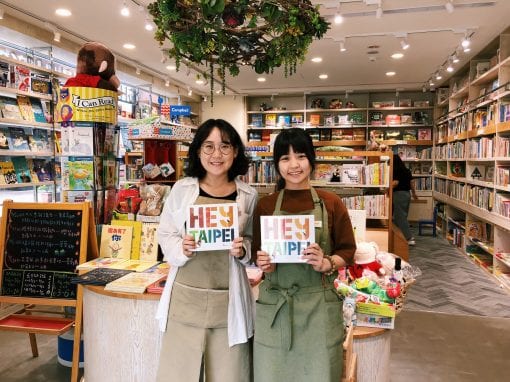